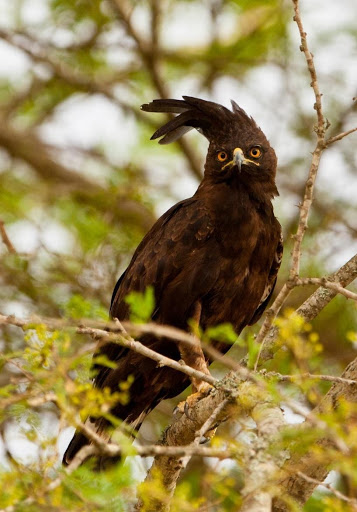 Welcome back to our weekly blog that explores a particular aspect of Uganda life, to learn more about the people and place that play host to our Adventure Like No Other! This week, we continue to look at the wildlife of Masaka…

If you missed the previous parts of this series, please find Part 1 here and Part 2 here. As always in this series, we are led by our guide Wycliffe who tells us about the birds he shows the International Runners during a 2-3 hour nature walk through the town, seeing the birds in their natural habitats and spotting wildlife,  during the week.

We begin with the Long-crested Eagle featured in the photo above. It is a distinctive eagle when perched due to the long, shaggy crest and all dark plumage. The adults are blackish-brown with long, thin feathers growing from the rear of the crown which is held erect to form a crest. The eyes of adults are bright yellow but can be darker in females, and the cere and feet are yellow, paling to white in males. The juveniles are similar to the adults, but the plumage (the bird’s collective feathers) is lighter in colour, the crest is not developed, and their eyes are grey.

It breeds all year but most eggs are laid from July–November. The female lays 1-2 eggs. 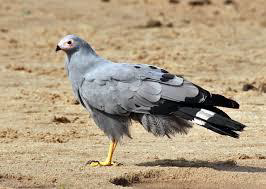 The African Harrier-hawk is a medium-sized raptor. The upperparts, head and breast are pale grey. The belly is white with fine dark barring. The broad wings are pale grey with a black trailing edge fringed with a narrow white line. The tail is black with a single broad white band.

African Harrier-hawk is omnivorous, eating the fruit of the oil palm as well as hunting small vertebrates. Its ability to climb, using wings as well as feet, and its long double-jointed legs, enable this bird to raid the nests of cavity-nesters, such as barbets and wood hoopoes, for eggs and nestlings.

These often accompany cattle or other large mammals, catching insect and small vertebrate prey disturbed by these animals. Some populations are migratory and others show post-breeding dispersal.

Their colonies are usually found in woodlands near lakes or rivers, in swamps, or on small inland or coastal islands. They are sometimes shared with other wetland birds, such as herons, egrets, ibises, and cormorants. 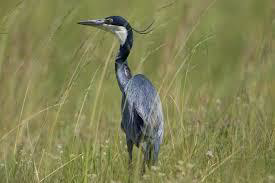 The black-headed heron is a wading bird of the heron family ‘Ardeidae’. This species usually breeds in the wet season in colonies in trees, reed beds or cliffs. It builds a bulky stick nest and lays 2–4 eggs.

Its plumage is largely grey above, and paler grey below. It has a powerful dusky bill. Their flight is slow, with the neck retracted. 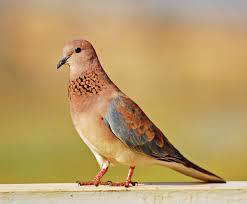 The Laughing Dove is a long-tailed, slim pigeon, typically 25 cm (9.8 in) in length. It is pinkish brown on the underside with a lilac tinged head and neck. The head and underparts are pinkish, shading to buff on the lower abdomen. A checkered rufous and grey patch is found on the sides of the neck, which are made up of split feathers. The upperparts are brownish with a bluish-grey band along the wing. The back is uniform and dull brown in the Indian population. It is a common and widespread species in scrub, dry farmland, and in areas of human habitation, meaning they often become very tame. 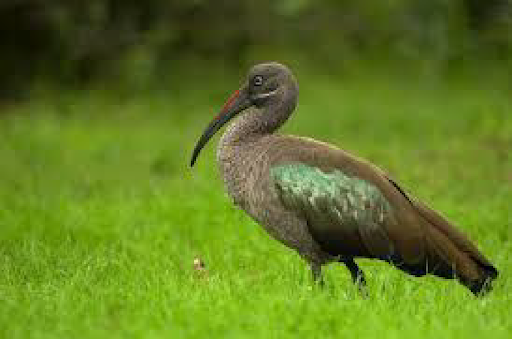 The Hadada is a large (about 76 cm long), grey-to-partly brown species of Ibis. Males and females are alike in plumage. It has a narrow, white, roughly horizontal stripe across its cheeks. This is sometimes called the “moustache” though it does not reach the mouth corners. The plumage over the wings has an iridescent purple sheen produced by optical microstructures within the feathers, where the colour can often change from different angles! The bird has blackish legs and a large grey-to-black bill. However, during the breeding season, it has a red culmen on the basal half of the upper mandible (see the upper ridge of the bill in the photo). It has an extremely loud and distinctive “haa-haa-haa-de-dah” call.

Wow! The perfect bird call to bring an end to the Birds of Masaka series.

Special thanks again to Wycliffe for all his great work on these three blogs.

Thank you too for joining us and see you here again next week!