Welcome back to our weekly blog that explores a particular aspect of Uganda life, to learn more about the people and place that play host to our Adventure Like No Other! This week, we continue to look at the wildlife of Masaka…

If you missed Part 1 of this series, you can find it here. This week our guide Wycliffe tells us more about the birds he shows the International Runners during 2-3 hour walk through the town, spotting wildlife, during the week.

These are some of the birds which can be seen:

Starting with the one pictured above, which is the Red-eyed Speckled Pigeon or (African) Rock Pigeon, it is a pigeon that is a resident breeding bird in much of Africa, south of the Sahara. It is a common and widespread species in open habitats over much of its range, although there are sizable gaps in its distribution. It is a large pigeon at 41 cm in length. Its back and wings are rufous, with the latter heavily speckled with white spots. The rest of the upperparts and underparts are blue-grey, and the head is grey with red patches around the eye. The neck is brownish, streaked with white, and the legs are red. 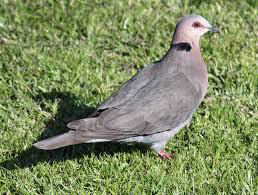 The Red-eyed Dove is a largish, stocky pigeon, typically 30 cm (12 inches) in length. Its back, wings, and tail are pale brown. When flying, it shows blackish flight feathers. The head and underparts are dark vinous-pink, shading to pale grey on the face. There is a black hind neck patch edged with white. The legs and a patch of bare skin around the eye are red. Like several other species in this genus, they are not particularly gregarious (ie. sociable) and often feed alone or in pairs. They can be found in forests near rivers. 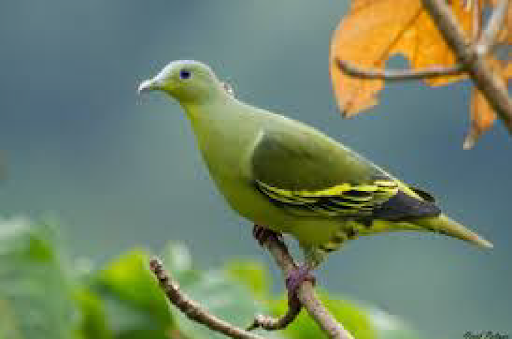 The Green pigeon adult birds have maroon shoulder patches (which are olive when they are younger) and rufous under-tail coverts. They reach a length of 25–28 cm. As with others in their genus, they frequent tree canopies where their parrot-like climbing ability enables them to reach fruits, but rarely they also forage on the ground as well. Their call is a series of flowing whistles, rendered as ‘thweeeloo, thweeeoo’. They inhabit forests, woodland, and savanna, where they associate with fruiting trees, especially wild fig (Ficus) species. 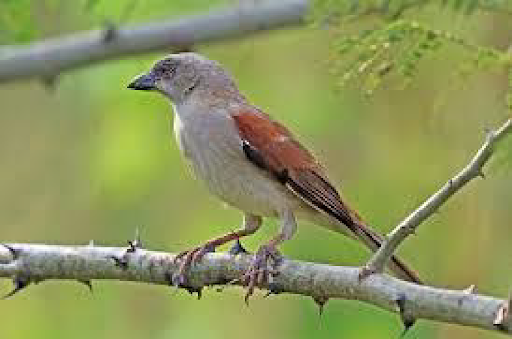 The Grey-headed sparrow has a pale grey head with a white moustache stripe. It has a mixture of pale brown and whitish underparts and chestnut wings with a small white shoulder patch. The sexes are similar, but young birds are slightly duller and lack the white wing patch.

There are three subspecies, differing in plumage tone, especially with regard to the darkness of the head.

This species feeds principally on seeds and grain, like other sparrows, but will readily take insects including termites, especially when feeding young. 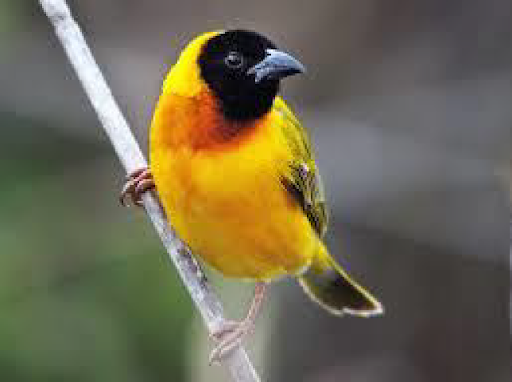 The Black-headed weaver vary between genders. Breeding males (right) have a black head and yellow nuchal collar, which is absent in the golden-backed females. It also differs from the female species and Village Weaver by its plain, greenish mantle plumage. The pale yellow underpart plumage is suffused with a variable amount of chestnut.

The female (and non-breeding male) lacks the blackhead, and resemble a female masked weaver, except that they have dark eyes and a darker bill. Their buffy breast plumage also distinguishes them from non-breeding golden-backed weavers. 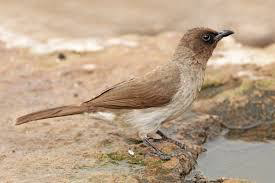 Finally, the Common bulbul has a bill which is fairly short and thin, with a slightly down curving upper mandible. The bill, legs, and feet are black and the eye is dark brown with a dark eye-ring, which is not readily visible. It is about 18 cm in length, with a long tail. It has a dark brown head and upperparts. Sexes are similar in plumage.

The common bulbul is usually seen in pairs or small groups. It is a conspicuous bird, which tends to sit at the top of a bush. As with other bulbuls they are active and noisy birds. The flight is bouncing and woodpecker-like.

Those will be all the birds for this week’s entry. Look out for our third and final entry in the Birds of Masaka series! Thank you for joining us and see you next week!