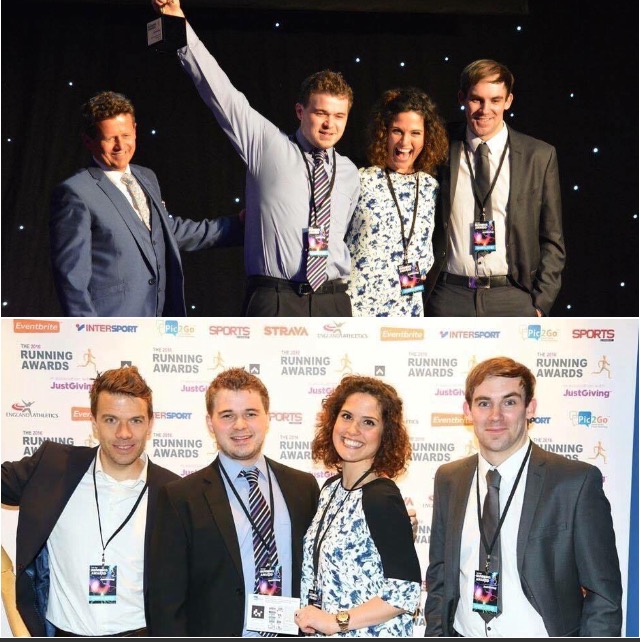 We’re ecstatic to report after being shortlisted for the ‘Best International Event’ at the Running Awards, it was announced on Friday evening we had won the award!!!

Held on a prestigious night at the O2 Arena in London, our Marketing Manager Andrew attended & was joined by 2015 UGM Runners: Mark, Emily and myself. The team was in good company, with a number of big names from the running world attending including Virgin Money London Marathon, parkrun, Race for Life, Lucozade Sport, Nike, Strava and many others.

The category of ‘Best International Event’ was announced towards the end of the presentation that evening, which made it feel like a lifetime before they reached the category we had been shortlisted for. But then the moment came, along with feelings of nerves and excitement. The Berlin Marathon…..third. The Dublin Marathon was second…and the winner was…..US!!

We’d done it- the Uganda Marathon had won the ‘Best International Event’ award and recognised as the best running event outside of the UK!!

It was an amazing moment to be present at, and a brilliant way to recognise the hard work that has gone into the UGM, as well as its successes over the last 18 months. More importantly though, this will support the event’s development and growth, and help it to help even more people in the future!

A massive, massive thank you to everyone who voted for us- we couldn’t have done it without you, and the support of the community around the marathon. The UGM’s community is really what has made the difference here, helping us to come out on top over some much more establish events. The community around the marathon is what makes it so much more than a race, and this is another example.

So a big, big thank you for all your support, both in this award and in general over the last 18 months. To all our 2015 runners, 2016 runners and team members, both past and present- you’ve made the last year and a half incredible, and we can’t thank you enough!

Now with less than six weeks to go until the UGM 2016, we turn our attention to making the final preparations for the 2016 event and hosting a fantastic week. And fingers crossed…Uganda’s biggest public fundraising event ever!