The Road to Uganda: A Newbie’s Marathon Training Diary – Week 4

Week 4- The Rollercoaster Ride of Training for a Marathon

The last eight weeks have certainly felt like I’ve been on some sort of rollercoaster ride as I’ve been training for the Uganda marathon. There’s been high points, and on occasion, low points too.

The first few weeks were particularly challenging. Running 3K or 5K was really tough, and running 10K seemed just too far too, with several runs being cut short at six or seven kilometres. Run 26.2 miles in Uganda in May? It seemed an impossible task.

But then a few weeks later, things began to fall into place. Going for a run seemed less daunting as the routine fell into place. A 3K was over before I knew it, 5K became a consistent achievement, and I was reaching the 10K distance again.

Things got even better in subsequent weeks. I ran a 10K in my best time ever, and reached a significant milestone in my training as I managed to run 20K. I felt like I was on cloud nine!

However over the last fortnight, things have felt like they’ve been getting tough again. The shorter runs have felt hard again and not as comfortable, and I haven’t always managed to complete the distances I’ve been setting out to do.

In particular I was especially disappointed I didn’t reach the half marathon mark on the Sunday before (in week 7), and only managing to get about half way through my planned route.

How training went in week 8

With my training taking a set back, I was becoming concerned. Was I loosing the momentum I had built up over the last eight weeks? Would I be ready to run 26.2 miles in six weeks time? Was there enough time before the 24th May?

To get things back on track, I decided I needed a win. And a big one.

So I elected to make a second attempt at running a half marathon distance (13.1 miles). The distance which I failed to make the week before.

To really add to the challenge, I decided I would run a route around my hilly hometown. It would range from off-road laps around the local meadow, to running the diameter of the town, to a circuit around the industrial estate, and then a few laps around the nearby pound. I would then attempt to run up one of the steepest hills in the area; Windmill Lane (a hill I’ve never managed to run up before), before a final mile to head home. 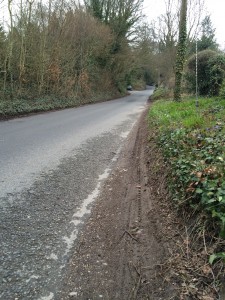 Windmill Lane…one of those hills that goes on… and on… and on… (neat the end of my run, to help replicate the ‘big hill’ on Uganda trail)

A tough route. But one that would certainly feel like a big achievement if I managed to complete it. As you can see, I was feeling motivated! 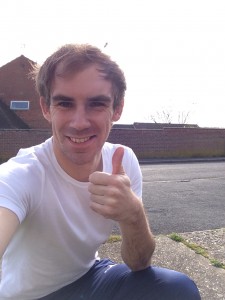 Surprisingly the majority of the run felt a lot steadier and smoother than any long distance run I’d done before. It was still certainly hard work and there was definite relief to cross that imaginary finish line, but it went a lot better then I thought it would, and it certainly went much better than the week before.

As expected running up Windmill Lane proved tough, and perhaps a little ambitious. As I could feel the effect of gravity increasing more and more as the climb got steeper, I did need to walk up a small portion of the hill, but I was able to resume my running pace again once I hit the summit. So I’m still yet to run all the way up Windmill Lane, but it felt like good practice for that big hill we’ve heard about in Uganda!

Finally, I was very proud (and surprised) of the time I achieved, which shaved several minutes off half marathon training from last year.

My Half Marathon Training Time

I’d covered half the distance I’ll need to on May 24th, and felt like I’d reached the half way point in my training in more ways than one!

Next week I want to keep the ‘feel good’ factor from Sunday’s half marathon run going into week 9 if possible. That would really help me to maintain the momentum, and help me to make the most of these final upcoming weeks.

However whilst I do want to cover as many miles as possible, I don’t want to push my body too hard and risk injury with the race day getting close. It seems to be a fine balance between pushing myself and listening to my body, and I’m still not sure what my body’s comfortable doing, so I I’ve taken three rest days this week- two post my big run, and one in the middle of my training days.

At this end of this week I’ll try and take on a very steadily paced 30K run, which might be too big a jump with only running a half marathon this week, but I will see how it goes. It will also be a good indication of how my training is going- 30K was the furthest distance I ran in my preparations for the Clarendon marathon.

So whether you’re running the full marathon, half marathon or relay on 24th May, I hope your training is going well. And even if you feel like you’re currently going through a low on this roller-coaster ride of training (and things aren’t going to plan)…just remember:

Keep running, keep going and keep training! It won’t be long before the next milestone in your training and things are back on track!