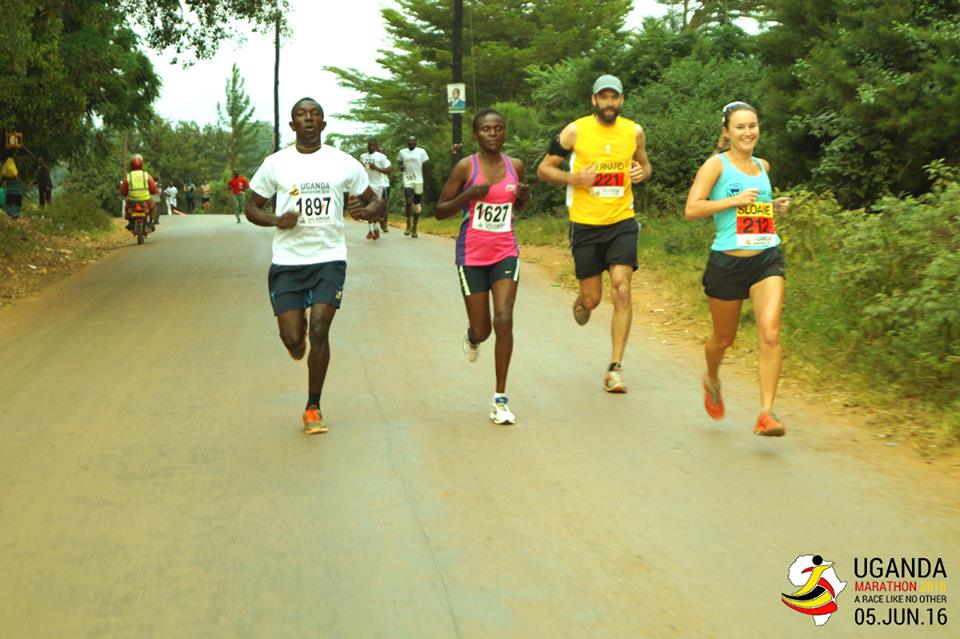 Katie, right, travelled from Dubai to run her third marathon

The runners make the Uganda Marathon what it is. The friendships, the community, the fundraising and the determination to finish is why the UGM is truly a Race Like No Other. Here we tell the stories of the runners who took part in 2016 event, as they share their insights and experiences of the week-long adventure.

Katie travelled from Dubai and came to the event as one of our more experienced runners, having run races all over the world. Our fastest female International Runner for 2016, she talks about the course, Race Day, the morning training runs, volunteering at the projects, making ‘friends for life’, UGM staff, and donating over 50 pairs of running shoes! Here’s her Uganda story…

I had desperately wanted to return to Uganda since I was there on my gap year back in 2008, but had always been dissuaded by poor excuses such as: lack of holiday, expense, no one to go with. I adore running, so this seemed like the perfect way to head back to Uganda and get a cheeky marathon in simultaneously. I saw the event advertised in 2015 but unfortunately, it conflicted with my brother’s wedding so I was determined to do it in 2016!

2. During the week you stayed at our hotel option. How was it?

It was awesome! The Hotel Plus crew were an incredible bunch of people and I definitely met people that I will hopefully be friends with for life. People seemed to think that we may have felt isolated there [compared to camp], but our LEADER…the superman himself, Ian, was incredible and made sure that we were enjoying ourselves at all times. I think he was shattered by the end of the week though! 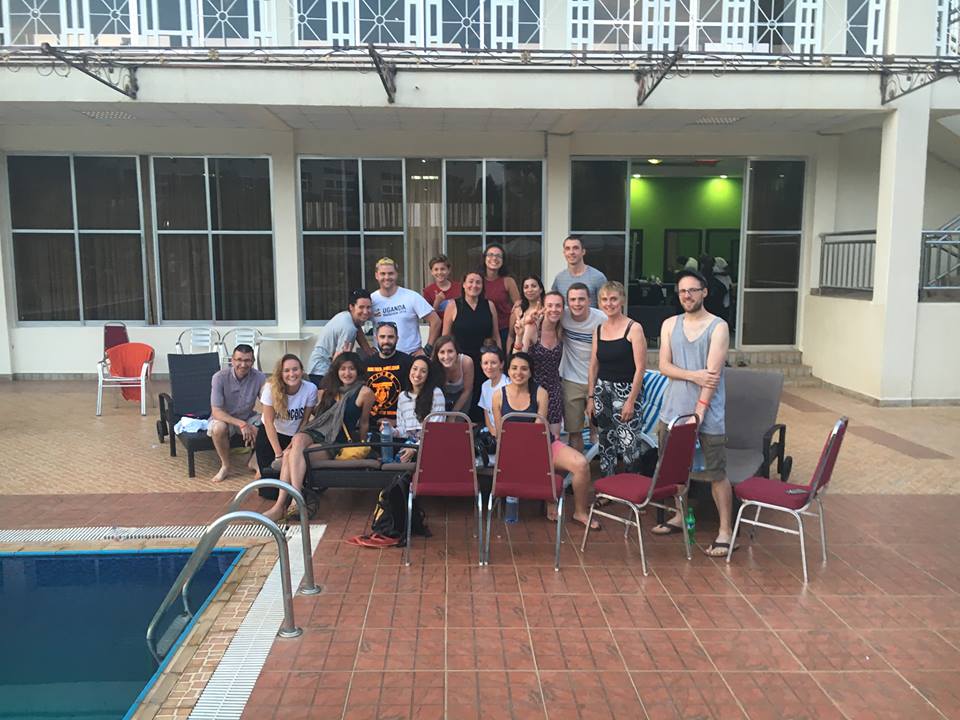 Katie, with the UGM hotel rep (Ian) and the other guests staying at the Hotel Plus

3. On one of the volunteer days, you visited Bugabira School, the project you were fundraising for. What was it like to meet and help the people you were running the marathon for? What did you get up to?

It was fantastic to see exactly where the funds I was raising would be specifically allocated: to the much-needed rebuilding of the classrooms which are currently very basic wooden structures.  I really hope I can return next year to see the progress that has been 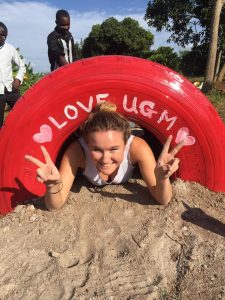 made. The kids at Bugabira were amazing! They showed us around the little school, then a group of the girls sang beautifully for us, and then we lent a helping hand in painting their new playground….my painting skills were quite questionable! The teachers at Bugabira are truly inspiring and seem to have energy and passion for education and the school, quite like nothing I’ve ever seen.

During the marathon, running down the hill through the school was my favourite part. Seeing the kids we had met just a few days earlier and having them cheer us on, genuinely gave me the determination to get to the end…particularly on the second lap when my knee was well and truly in bits. I should have heeded the ‘Top Tealey Tip’: Never underestimate the Ugandan hills!

4. You got involved in our morning training runs throughout the week. What were they like? Did they help you prepare for the race? 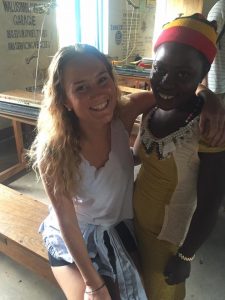 Yes I went on a couple of the morning runs ahead of the marathon – it was a great opportunity to meet some of the fellow International Runners and the members of Masaka Running Club, as well as a fantastic chance to get used to the altitude. When you head up that first hill you really do feel the effects of the altitude, so it’s definitely worth getting in the slow steady gentle runs to get your body used to it. ‘Top Tips Tealey’ did an awesome job of showing us around….even if I did beat him on every morning run heehee! 🙂 The Masaka runners don’t hold back and I think I finished every morning run with an uphill race with one of the crew!

The 5k “downhill run” (there is no such thing in Uganda) was a great chance to test your legs, get your lungs working and get some speed in before the marathon…miss this run at your peril! It definitely gave me an idea of what was to come. That 5k felt a lot harder than it should of and when I set off from the start line on Sunday morning, I had that in my mind meaning I didn’t set off like a bat out of hell as I usually do.

5. Katie, you came to the Uganda Marathon as one of the more experienced runners. What was it like to run a marathon in Uganda and how did it compare to other races you’ve experienced?

Despite the fact that I have only done two marathons previously, I have run in races all over the world. But without sounding too cheesy, the Uganda Marathon truly is a race like no other. 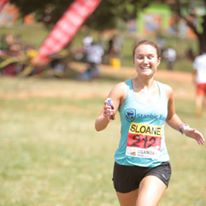 On the home-straight, having run 26 miles, about to cross the finish line!

There’s certainly nowhere else I can think of where you stand on the start line next to a chap in a Ugandan national vest who tells you his PB is 2h17min, then run into a herd of cattle, and later casually run past [Ugandan] Prince David! The views are truly like nothing else and the attitude and spirit of all of the runners both international and local, is so uplifting. I spent a lot of the first half of the race running with local guys doing the half marathon. They were so encouraging. If they felt I was struggling up the hills they would shout words of encouragement – I wish they had carried on to the second half of the race when it really started to hurt!

The difficulty of the race was definitely something I underestimated. It is not a PB course and so don’t come out looking to get a PB because you’ll find it difficult to enjoy the rest of the week (FYI: I wasn’t looking to get a PB so I did enjoy the week 🙂 ). It’s safe to say I was 45 minutes off my PB, which is probably even true for the super fast Ugandan that won. But that is what is so unique about the course. You have such different challenges to other races, so your focus during the race is on completing it and the reasons why you are doing it.

6. Coincidently, you ended up meeting one of the runners who received the running shoes you donated? Could you tell us a little bit about the experience? 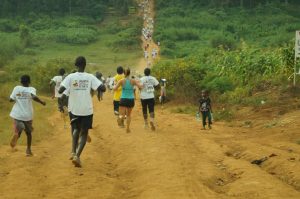 Katie, taking on ‘The Beast’ alongside local runners

The Dubai Road Runners (my running club in Dubai) were overwhelmingly generous in their donations of trainers and I ended up with about 50 pairs of trainers to take out with me! Many of the trainers donated were brand new pairs from the club’s sponsor, Puma. They were bright blues and greens…very tricky to miss. As I was struggling up ‘The Beast’ [the course’s biggest, steepest hill] on the first lap, my eyes were fixated on the ground as I didn’t dare to look up and I noticed a pair of the bright Puma’s trotting up the hill next to me. Immediately I shouted with excitement and explained to the guy that I had bought the trainers from Dubai! The chap then took my hand and dragged me up ‘The Beast’, which as all Uganda Mara runners know, goes on and on and on….and when you think it’s finished…it just goes on more! It is definitely worse the second time around too… Anyway, this lovely chap and I ran hand in hand (rather he dragged me up the hill) for about a kilometer, before he stopped to wait for his friends! I was very disappointed when he left me but it definitely gave me the mental boost I needed at that point in the race.

7. Finally, what was your best overall memory of the Uganda Marathon, and how would you sum it up for someone who hasn’t been?

Ah that is so so tough! I don’t know if I can single out a particular memory. I don’t think I stopped smiling from the start to the end of the week. I went out to Uganda alone, not knowing anyone and from the moment that I arrived in Entebbe I felt like I had friends immediately. It really was a week like no other- the experiences, projects we visited and the marathon itself are all individually very special memories.

Visiting Bonnie, a child with severe autism and other disabled and abled children in a tiny village a way out from Masaka with Andy Bounds [UGM’s Community Partnership Manager], is a day that sticks out as being particularly significant. Not only was it incredible to help Bonnie and his family and friends by building a fence surrounding his house, and then playing British Bulldogs for 2 hours with all the kids (I was well and truly exhausted), but I also met my friend Claire. Claire and I bonded over a love of digging holes (or trying to and getting laughed at by all the kids) and she has now bravely joined the expat gang and moved out to Hong Kong!

That is what the whole week is about…having truly unique experiences, contributing to a truly inspirational community and their incredible initiatives, and meeting a whole bunch of exceptional people…of course including ‘Top Tips Tealey’, who’s Top Tips I will treasure for life! 🙂 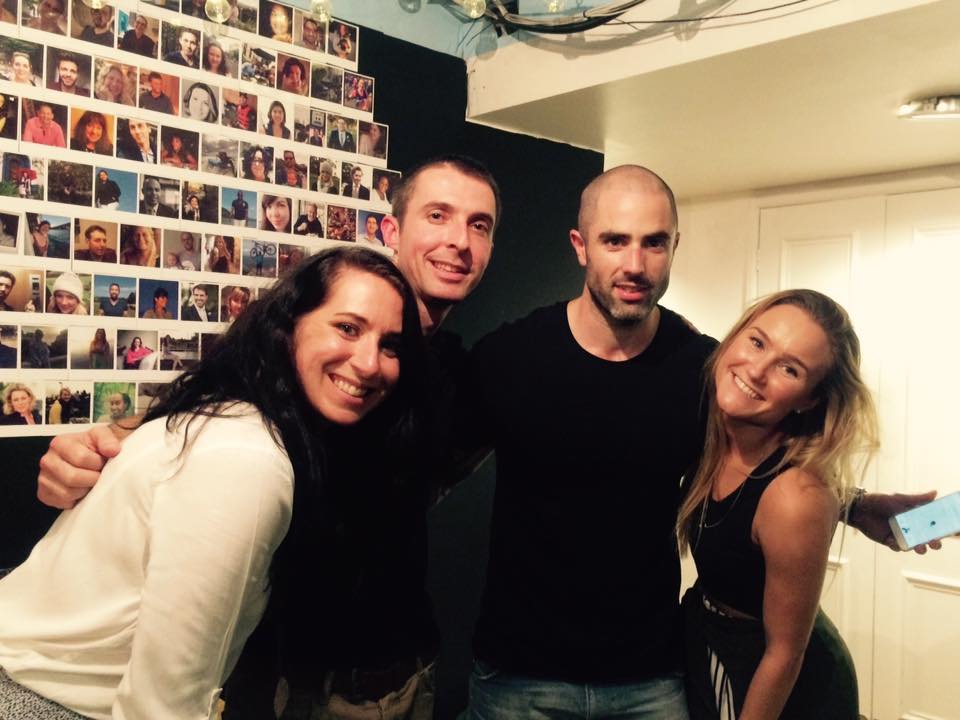 Katie with Claire (left), post-marathon and back in the UK, at one of our reunion events in July 2016