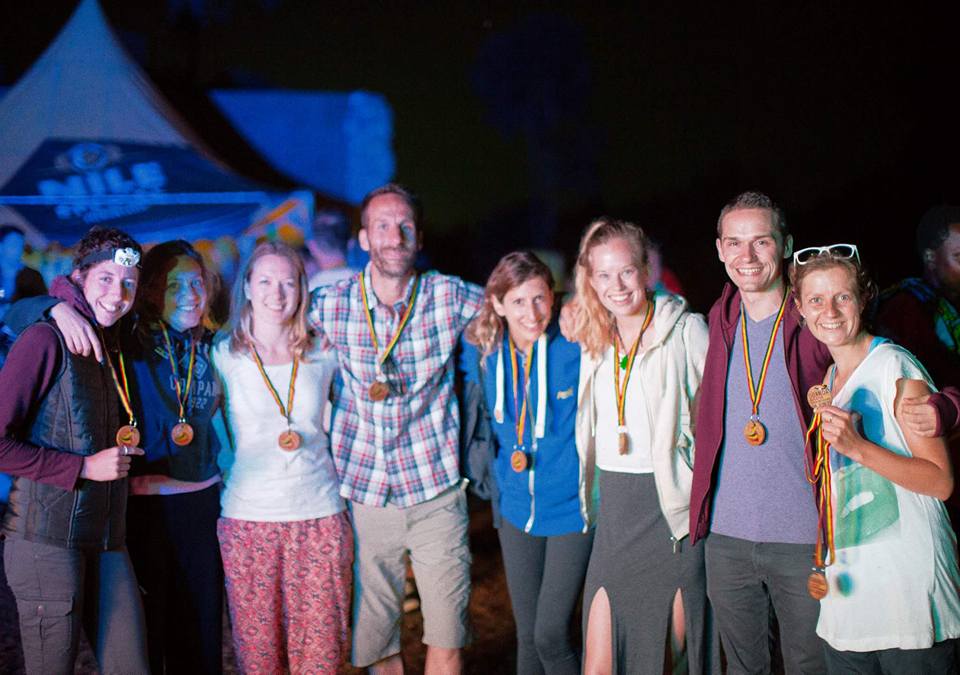 Kate (centre, in blue) with friends, new and old, at the medal ceremony on the final night of the 7-Day Adventure

Kate joined us for her first ever visit to Africa where she took on the challenge of the 42K event, her first trail marathon! Below, she shares her experiences of staying at Athletes’ Village, volunteering at the project ‘House of Love and Hope Uganda’, connecting with the local running club, and the big day itself, Race Day!

1. What made you sign up for the Uganda Marathon and was it what you expected?

The Uganda Marathon had been on my radar for a little while. I’m always on the look-out for good volunteering opportunities and loved the idea of being able to spend time with the local community, supporting local projects and training with the local running club before taking part in a marathon together at the end of the week. I’d also been wanting for a long time to visit Africa, and this seemed to be the perfect way to travel there – staying in a village off the typical tourist track and getting a true local experience, while at the same time, helping to make a positive impact. A few of my friends had done the Uganda Marathon the previous year and spoke very highly of it. When they signed up again, along with some other first-timers, I just felt like it was a trip I had to join.

Despite the bar being set pretty high, the Uganda Marathon totally surpassed my expectations. I was blown away by the beauty of the country, the welcome and hospitality from the local community, and the impeccable organisation throughout the week. The Athlete’s Village where we camped for the week was beautiful, with incredible views across the countryside. So much care and attention had gone into the set-up. The UGM team, made up of the UK team along with Ugandan locals, couldn’t have been more supportive and wonderful, sharing their infectious passion for the projects whilst working tirelessly to keep everyone happy and ensure the smooth running of the camp.

There is a massive focus on sustainability and long-term development, and I saw that a huge amount of thought goes into directing funding and volunteering efforts in a way that respects this goal. I felt extremely privileged to be part of the amazing legacy that the Uganda Marathon is building.

2. You visited the Charity Project House of Love and Hope Uganda during the week. What was your experience of visiting the project?

It was incredibly inspiring to visit the local projects where funds were being donated and to see the huge improvements that had already taken place since they had started to receive support from the Uganda Marathon. My group visited one of the local schools that the ‘House of Hope Uganda’ was working with to provide an on-site water supply, something which we generally take for granted. Arriving at the school, being given a tour of the classrooms and interacting with the kids was a very special experience.

They had already been digging a well at the bottom of the garden, and our job was to dig a trench so that a pipe could be laid. It was a hard day of physical labour in +30 degree heat, but also really fun and rewarding. We also delivered to the school two large recycling bins that we’d made ourselves the previous day out of used plastic bottles and they would be used to collect other plastics for recycling.

At the end of the day, the headmaster had arranged for us to play a volleyball match with some of the children. We were pretty terrible but hopefully at least a source of amusement for the spectators! It was great to be able to see the results of the day’s work and to leave the project having witnessed for ourselves the changes that were taking effect.

3. You ran the 42K event. What was it like to run a marathon in rural Uganda? How did you feel before the race and how did it feel to cross the finish line? 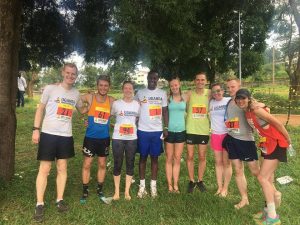 The race itself was brutal but at the same time one of the best runs I’d ever done. I hadn’t really bargained on the difficulty of terrain, the topography or the effect of the altitude. There’d been torrential rain the night before, so the ground was muddier than usual and our start-time was delayed while the UGM team drove the route to make sure that it was safe to run. It was also extremely hot, with the sun beating down right from the outset.

I was a little bit nervous before the race as I didn’t really know what to expect. I’d only run a marathon distance twice before, on flat roads, so this was a completely new running experience for me. I was in the middle of training for an ultra-event a month later and had hoped that the Uganda race would function as a nice training run. However, I very quickly realised that even running at a gentle pace, it wasn’t going to be easy. My quads blew up very early on, on the first steep descent, so most of the run was pretty painful. However, having no time pressure meant I could really make the most of the whole experience and take everything in, stopping for photos and chatting with lots of other participants along the way. The 10km and half marathon races used the same course, which was great as it meant there was a wide mix of people all on the course at the same time, including local kids and people walking the route. It felt like the whole town was coming together for the event. The scenery was spectacular and the support on the course was unbelievable, which definitely helped to take my mind off the pain. Having excited school-children run out and cheer, high-five me as I went past, or grab my hand to run along with me for a while, made the event incredibly special.

Crossing the finish was amazing – there was definitely a sense of relief but it also felt like a big achievement.

4. Overall, what was your favourite day of the week and why?

It’s so hard to single out one day, as the whole week was awesome from start to finish, and jam-packed with great activities and experiences. I got to meet some amazing people from all over the world.

However, if I have to pick one day, it would probably be the day of the marathon. It felt like the culmination of the preceding days, and there was such a great sense of camaraderie. So many people came to the main square for the after-race festivities, so it felt like a real celebration. After the race, I caught up with a couple of young guys from the local running club who I’d seen on the course and they told me about their plans and aspirations. It was so nice to hear about their passion for running, which had come about through the first Uganda Marathon. It was the perfect ending to an unforgettable trip.