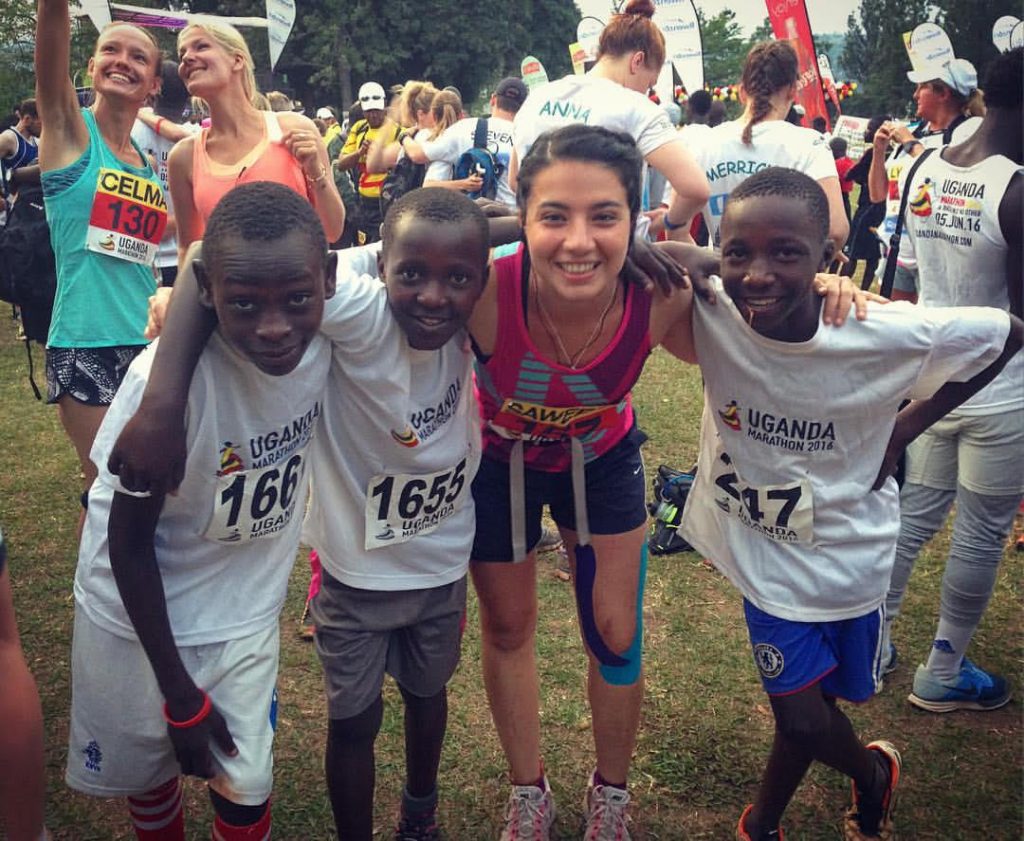 Heidi, with some local boys, just before she runs the Uganda Marathon

The runners make the Uganda Marathon what it is. The friendships, the community, the fundraising and the determination to finish is why UGM is truly a Race Like No Other. Here we tell the stories of the runners who took part in 2016 event, as they share their insights and experiences of the week-long adventure.

Heidi’s friend ran the Uganda Marathon in 2015 and after hearing about the experience from her, she decided to take the plunge herself. Whilst in Uganda she volunteered at three projects: Bugabira Primary School, MRVC and Youth with a Vision. Then, after the challenges and celebrations of Race Day, she extended her trip to go on Safari in Queen Elizabeth National Park and go gorilla trekking in the Rain Forest…

My very awesome friend from work (Megan Rowe) did the very first Uganda Marathon in 2015. I remember her saying that it was one of the best experiences she’s had and she met loads of amazing people and made good friends from it, so I had to try it out for myself.

It exceeded any expectations that I had. I went to Uganda by myself, so was a bit worried about meeting people and enjoying the week as I was going to camp with complete strangers, but from the moment I landed everyone I spoke to and dealt with was extremely friendly and sociable. It was like the whole Athlete’s Village was one big happy, loud family. It was pretty amazing.

3. What projects did you volunteer at during the week? Could you tell us about the experience?

I volunteered at Bugabira School, MVRC [Masaka Vocational Rehabilitation Centre] and Youth with a Vision. 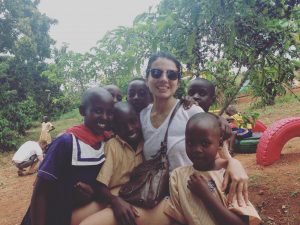 The Bugabira school was such a humbling experience. Seeing all the children completely ecstatic about meeting everyone, with the biggest smiles I’ve ever seen on kids despite their circumstances and very poor living conditions.

The second project was MVRC which is a center that helps handicapped youths learn skills so that they are able to financially support themselves. There were many activities and I chose knitting since I’ve never done that before and I would get to keep an awesome Uganda beanie! The project was outstanding as you could see how much it was helping these individuals who otherwise would be struggling, and gives them a sense of purpose. A deaf and dumb girl from the centre taught me how to knit, although you’d think we wouldn’t be able to communicate… but somehow she managed to teach me how to do a few knots on the machine and was extremely patient when I was being extremely slow on the machine. 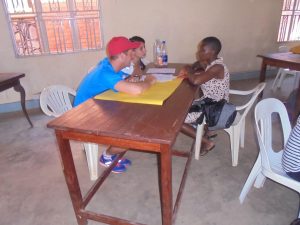 The last project I volunteered at was Youth with a Vision. This project helps young entrepreneurs kick start their business. We got to listen to people’s business proposals and give them practical advise. As I do not have any business background (as I work in healthcare) I thought I’d be pretty useless at this but to my surprise, I was actually able to discuss with them their proposals and give very simple advice. They actually found this useful as a lot of the time it was common sense but they needed an outsider’s view to give them ideas on common businesses in the UK that they necessarily wouldn’t have heard of in Uganda. 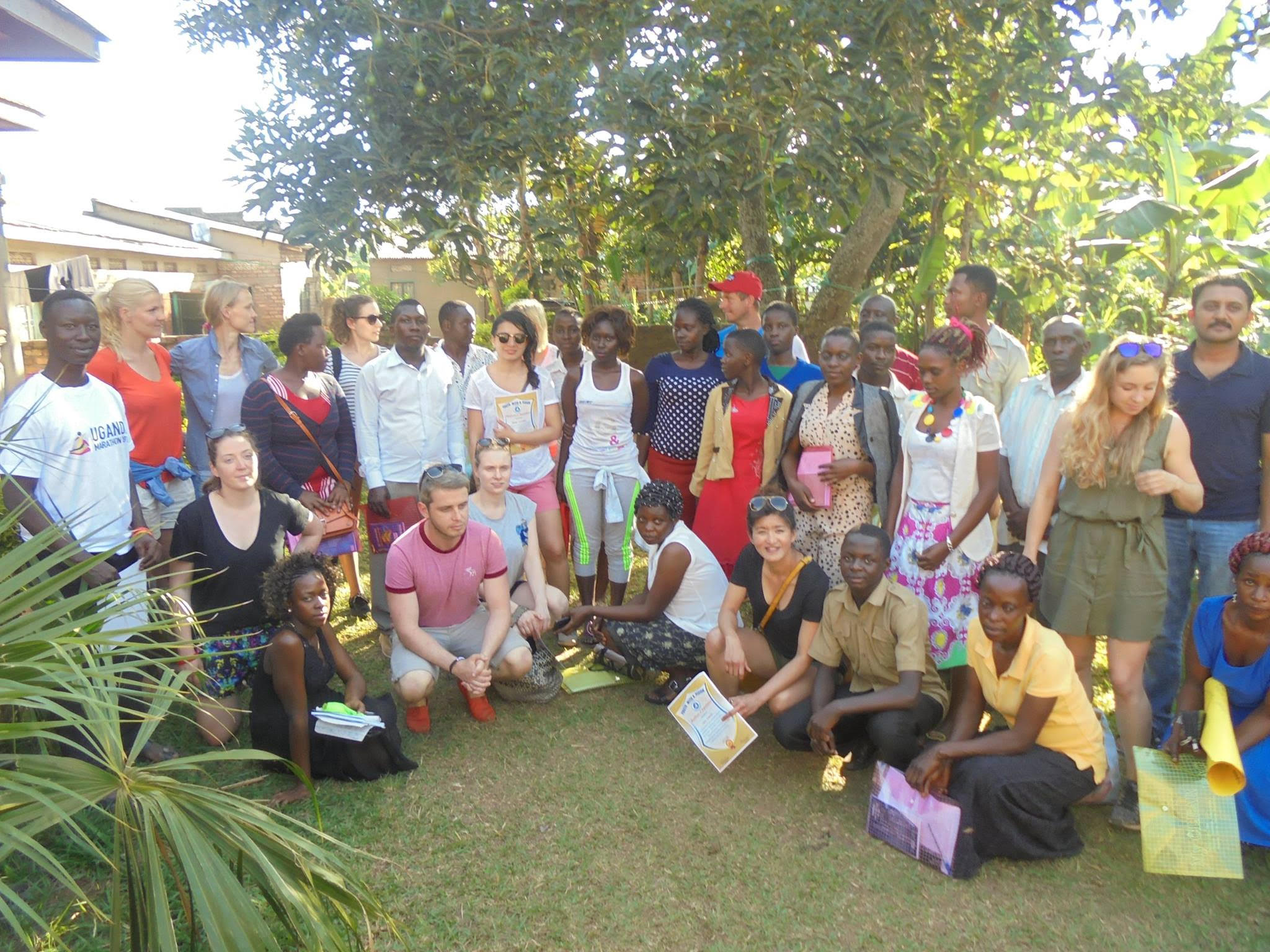 The volunteers and students outside Youth with a Vision, after a day of developing business plans

4. You stayed in Uganda for a bit of extra time following the Marathon…what did you get up to? Can you tell us about your expedition in Uganda…

After the marathon was over I had signed up for the combo extension post marathon, which was the Safari at Queen Elizabeth National Park and gorilla trekking at Bwindi National Park. And I’m glad I did it because everyone was getting emotional and sad as the race was over and everyone was heading home, but I was still excited about my trip which wasn’t over yet! 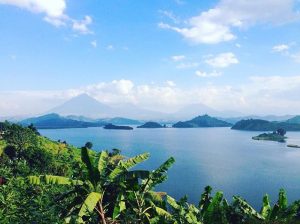 Heidi got to see a number of sites on the drive, including Lake Mutanda

We got picked up from the campsite the day after the Marathon, on Monday morning, by our guide and started our long drive to the safari park. The drive itself, although being rather long, was very scenic and it gave us the opportunity to see more of the country. When we got to QE National Park we jumped on a boat and did a tour of the Kazinga Channel where we saw some very happy hippos, elephants , crocodiles, buffaloes and others. We then did more land safari and spent the night in this amazing safari bed and breakfast. After a week of camping anything with a mattress would have been sufficient but this place was quite luxurious and we got to see the best sunrise the next morning, which was an added bonus.

Up close and personal to a Gorilla in the jungle…

The next morning we did some land safari and then started the long drive to Bwindi. Again the accommodation near the park was amazing, all our rooms overlooked a small lake which was very picturesque. The morning of the trek we drove to the gorillas, which was about a 90 minute drive, but on the way we drove past Lake Mutanda that was simply breathtaking. We were very lucky that the sun was shining and it was blue skies all around.

At Bwindi National Park we got split into three groups and each group was going to trek one gorilla family each. Our group was trekking a gorilla family that was the furthest away in the jungle, so that was quite exciting as I’d never trekked in a rainforest/jungle before. The trek itself was quite challenging as it was rather up-hill with altitude, but the amazing scenery made up for it and being in a jungle itself was just awesome! After about two hours, we finally got to see the gorilla family which was pretty unreal as you’re so close to them in their natural habitat. They were so beautiful and very interesting to watch. We got to spend an hour with them which was plenty of time. Then we started to make our trek back. We spent our last night at the same accommodation and the next morning everyone went their separate ways.

I am really glad I did the extensions as it was the perfect end to an already epic week and I made more friends and more awesome memories. Now that I’m writing about it, it’s making me want to do it all over again. 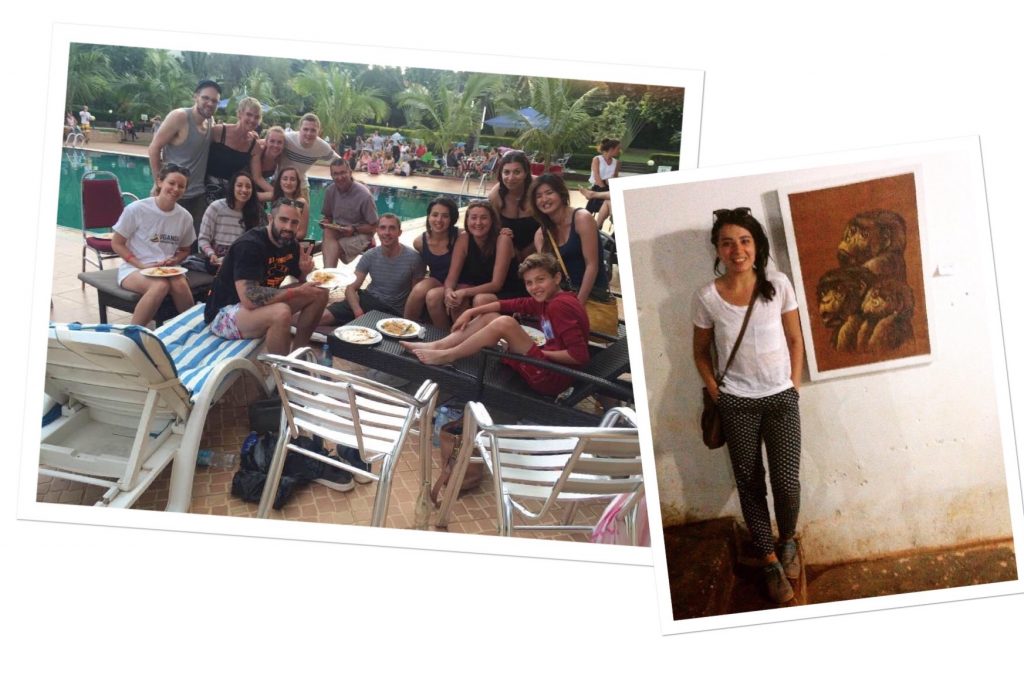 A massive thank you to Heidi for taking the time to do the interview and for providing the amazing photos from her trip!