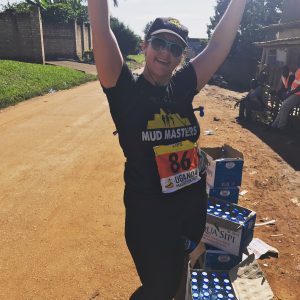 From Amsterdam, Esther participated in the half-marathon event, using the challenge to fundraise for the Charity Project ‘Knowledge for Children’. Our biggest fundraiser in 2017, here she shares her experience of the week, talks about her fundraising journey, and shares some tips for future runners!

In the fall of 2016, I was in the final stage of my PhD. Between all the hard work, I was dreaming about rewarding myself with a special trip when everything was finished. But I didn’t want to make a ‘typical tourist trip’. Around the same time, one of my friends ran the New York marathon for a good cause. This inspired me to do something similar. I started my search for a half marathon for a good cause and one of the first hits on google was the Uganda Marathon. In a split second, I knew: ‘THIS IS IT!’.

Running for a cause in Uganda was a great opportunity to return something to the world, fulfil my personal dreams of meeting the real Africa, and an opportunity to cross running on the equator off as my first ever half marathon!

2. What project did you choose to fundraise for and why?

This is where it gets a little personal. I grew up in hard circumstances. And the fact that I obtained my PhD in January 2017 was therefore not a matter of course. Since I was a little girl I knew that even when life was cruel to me, life could be worse. And that I had a lot of opportunities as a Dutch citizen. In the Netherlands, you can make a quarter from a dime as long as you work very hard and make the right choices. And that’s what I did. Fast forward: education was my way to a stable and happy life. And I’m very grateful for that. That’s why I decided to run for Knowledge for Children, which is a Dutch NGO that has the aim to improve the quality of education in Uganda. By supporting them, I hoped to bring joy, happiness and independence to other children in need.

3. How did you go about fundraising?

At the beginning of December 2016, I made a fundraising page and set my goal on raising €7500,-. But because I did not want anyone to know about ‘my next big project’ before my graduation in January 2017, I kept it a secret for a while. Although I did ask my colleagues to donate instead of giving me presents on the day of my graduation. And they totally blew my mind by donating over €1000,-!

From the beginning, I knew that I would reach my goal of €7500,-. But a few weeks after my graduation I realised that my aim was high and that I had to come up with something special to achieve my goal. I came up with several projects and in the next few months I was:

It took me A LOT of effort but I managed to collect about €5000,- via those projects. I did not organise dinner events at my place, since I already had my graduation in January and my 40th birthday in May, which I did not want to use for Uganda. But in the final weeks, I did ask my friends and family to donate, which they did! Just days before leaving for Uganda, I reached my goal and more! I managed to collect an amazing €8000,- in total!

4. How did you find the experience of fundraising for the event?

Fundraising showed me unexpectedly something beautiful. I’m a very social girl, but I’m not a ‘people person’. I’m not a shy person, but I am an introvert. Fundraising for a cause made me go into the wild: meet and talk to people in a way I never did before. And I loved it! I never knew I had that in me! There were also many people that offered help. And so many people told me about their own experiences with NGO’s and events for charity.

I completely dedicated my life for a period of 5 months to others. And it was one of the best experiences of my life! I would recommend everyone, who has a similar dream: ‘Stop dreaming. Just do it!’

5. Do you have any fundraising tips for future runners?

Tip 2: Come up with projects by which you return something.

Tip 3: Sell small items that fit in the mailbox and items most people will use/eat (like chocolate bars with your personal foil, jewellery, items for children).

Tip 4: Focus on females when you want to sell stuff. They buy! Males rarely buy (unless it’s beer!).

Tip 5: Organise events like dinners and bingo at your place.

Tip 6: Organise a Zumba/spinning event at your gym.

Tip 7: If you would like to receive donations from family and friends without doing something in return, you have to repeat your story over and over.

Tip 8: You will receive donations from people you never expect and vice-versa. Don’t be disappointed.

6. Could you tell us about your experience with your chosen project whilst in Uganda?

In the days prior to the marathon, we visited 2 schools that are supported by Knowledge for Children (K4C). One of the schools was already in the K4C program for 2 years and could already read and write properly! The second school we visited was the one I was able to support with the money I had raised. This school was in a more rural and poor area. The children were quiet and shy, even when we played a game with them. I think some of them had never seen a white person before. After we gave them all an eraser and pencil they became our friends. Just before we left we taught them how to say ‘Bye’ in Dutch (which is ‘Doei!’). We ended up saying it about one million times: ‘Doei!’. Too cute! 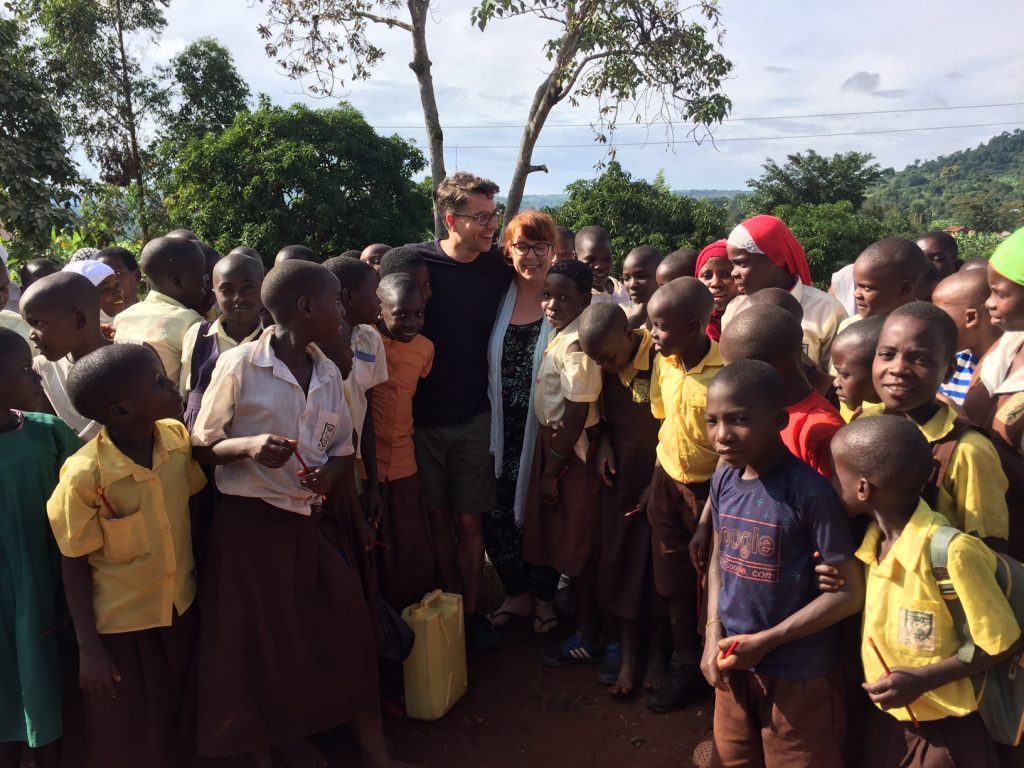 7. You brought some extra bags with you with donations in for the local community. Could you tell us about these? 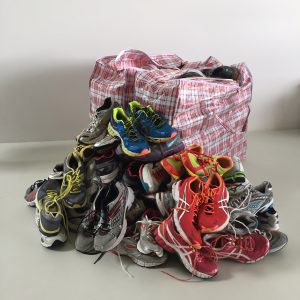 Just some of the running shoes Esther was able to collect to donate to Masaka Running Club!

A few weeks before I left for Uganda, I was asked to collect running gear for the Masaka Running Club. So, I asked my friends and neighbours for their old running shoes. And what happened was mind-blowing. One of my friends collected about 50 pairs of shoes and another one collected 15 pairs of shoes! I expected to collect a few pairs from my neighbours…but after one day I already had 20 pairs! After 2 weeks I had 200 pairs / 80 kilos / 4 large bags of shoes in total! Can you imagine?!

Fun fact: when entering Uganda I was picked out of the line by the security and had to explain why I had so many shoes in my luggage!! 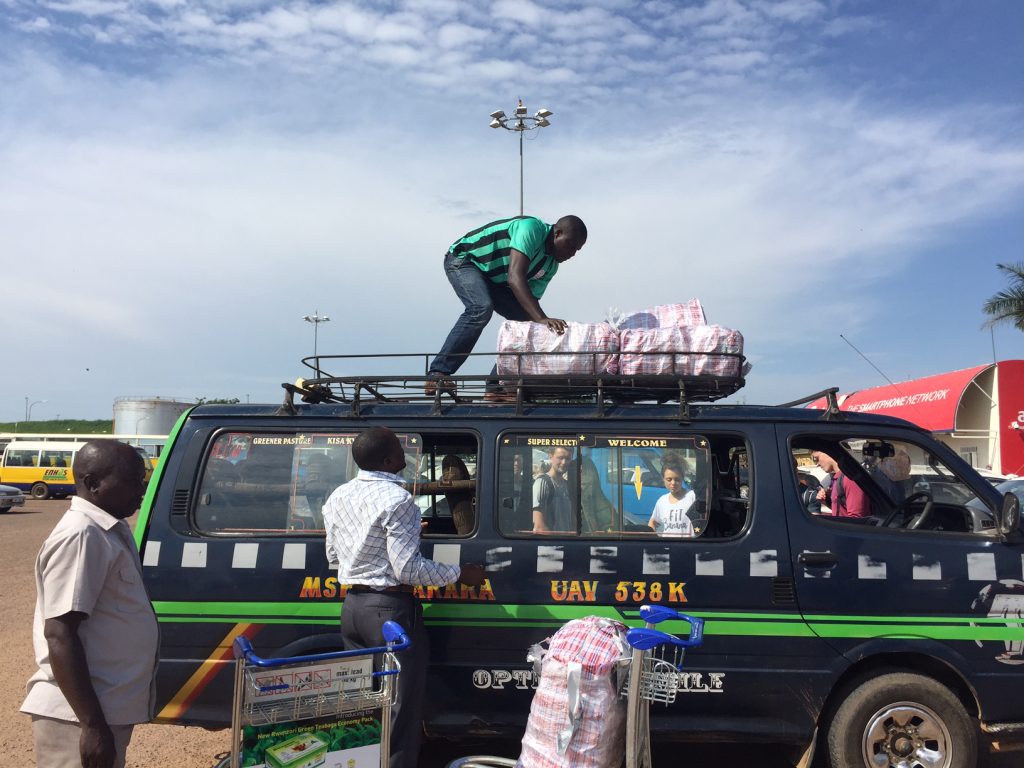 8. What was it like to run in our half marathon event and how did you feel on Race Day?

I was a 5k runner for 10 years, and although I was dreaming/thinking about running a 10k eventually, I never came to that point! I always taught that was something I could not do while being 20k overweight…but how wrong could I be!? I started training in February and at the moment I ran my first 10k without any problems, I fell in love with endurance running. I’m ALWAYS nervous before I do a long distance run, but it’s an incredible experience to run through nature and to experience what my body is capable of! For the half marathon, I ran up to 15k in the flat area of Amsterdam, the Netherlands, so I was confident of finishing the half marathon in Uganda.

But when I arrived in Uganda and noticed the hilly area, my confidence melted completely. The first two days I was totally in shock: ‘How do I manage?!’ Although I knew the only thing I had to do was finish! Nothing else! But when the days went by, circumstances got worse. We were staying in the hotel and at night there was, unfortunately, noise from outside. So I was feeling sleep deprived!

And then there was also something with my belly, which got really worse on the morning of the run. Oh boy! Oh boy! That morning, I was severely in doubt of running, since I did not feel great. I didn’t know what to do! Should I cancel the run? Should I go for the 10k? HELP! On the very last moment, I decided to start with the half marathon anyway, because I did not want to leave Uganda without trying to fulfil my personal dreams. And I knew that there was the possibility I could always stop if I really struggled.

After firing the starting gun with the prince of Buganda –which was my prize of being the fundraiser of the week– I started my race about two minutes after the half marathon group. This was perfect for me since I love to run alone. In the first 15 minutes I managed to pass a few runners, but for the other 18k, it was just me and nature! I ran through banana plantations and along the best views. I stopped many times to enjoy the scenery. And what about the incredible amount of children that were waiting for us and their ‘high five’ along the route!

After 10-12k I met my husband for a chat and check-up. Was I doing ok? Oh yes! I was running on clouds, enjoying every single moment. I had lots of energy! So, I ignored that blister under my foot and continued my half marathon. I knew that I would finish. And I did!

The hardest part on the run? Not the humidity. Not the hills. Not my belly. It was the sun. Ironically we had barely seen it during the whole week, but there she was on Race Day!

The best part of the run? Just me, nature, the so many children along the route, and surprisingly…the hills! I enjoyed running in nature and hills so much that I’ve now decided to start trail running. My goals? Run the world!

9. Finally, what was your favourite memory from the week and how would you sum it up for someone who hasn’t been?

But I also think about the amazing greenness and the lovely red soil. And last but not least, during the week we had so much fun with the lovely and successful women behind ‘Knowledge for Children’ – these ladies deserve a statue! 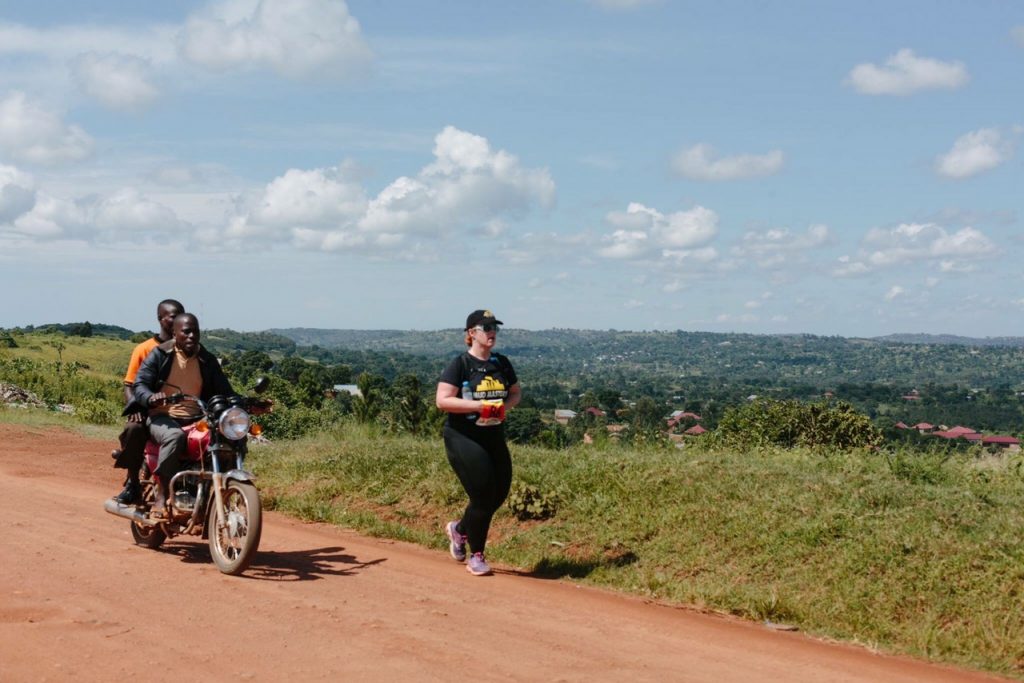