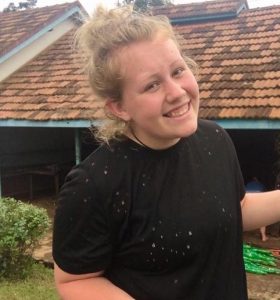 Amy, from Barnsley, was seeking an opportunity to do some volunteering for charity but didn’t consider herself well travelled. However, she decided to take the plunge! She fundraised for Bugabira Primary School, used her time in Uganda to go on Safari and Gorilla Trekking, and despite not considering herself a ‘runner’, on Race Day she stepped up to do the Half-Marathon!

1. What made you sign up for the Uganda Marathon?

I signed up for the marathon because my friend Ryan suggested it- he had seen it on the internet and we were trying to find an experience that would suit us both. He loves to run and I’ve always wanted to do charity work, and it combined both of them into one. I was apprehensive at first as I didn’t know what to expect… I hadn’t travelled that far away from home so it was very nerve racking but with the extra push I needed, I decided to sign up. But I’m so glad I decided to go in the end as going to Uganda was the best experience of my life!

2. Which project did you choose to fundraise for? Tell us about why you chose this project and your experience with them in Uganda.

I chose to fundraise for Bugabira Primary School and chose this project because I felt like the children in Uganda don’t have the opportunities of children in more westernised countries and believed that Bugabira school would be a worthwhile cause. 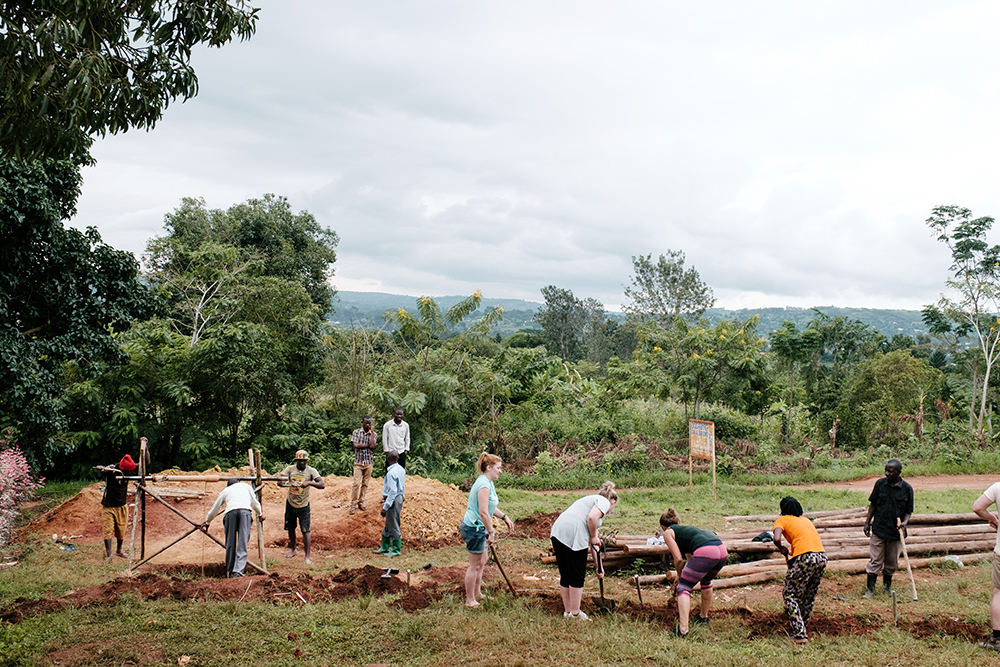 On ‘See your Legacy Day’, the runners pitched in by helping to dig a trench for a new water supply (Photo Credit: The Glass Passport Project) 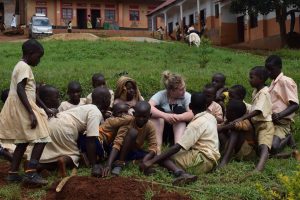 My experience with the children at Bugabira was incredible, to say the least…I have never met a group of young children that were so kind, welcoming and who were constantly smiling. When we arrived at Bugabira I was so excited I could literally feel my heart beating out of my chest. We were walking down a large hill into the school and all I could hear were drums and singing as we got closer. I could see all the children and as soon as they saw us around 70 children just came running towards us hugging us and welcoming us! It was an unbelievable experience, having about 10 different children just clung to my arms and waist…they were so excited to show me their rooms and classrooms.

We spent the day digging a trench for a piping system to be installed for running water to be placed up at the school. We also interacted with the children – we played in the playground that had been built [by a group of runners from the previous year] and spent a lot of time dancing and talking. We then did a short teaching session, talking about the countries we came from. The children asked questions about our home lives and how many brothers and sisters we had and we asked the children questions about their lives too. I just never wanted to leave…without a doubt the best day of my life! 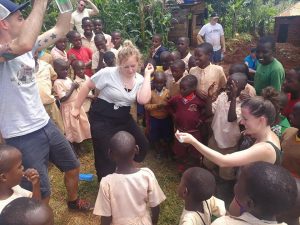 The runners dance for the children, much to their delight!

3. You participated in our 21K event – could you tell us about the experience of Race Day and what it was like to run in rural Uganda?

I originally signed up for the 10k event as I am in no way a runner, but I thought instead of not doing anything, I’ll choose the least amount of running I could do! Then at about 5am on Race Day we had all woke up and were getting ready for the event and it seemed like everyone was doing either the marathon or the half marathon so after some convincing (and most likely lack of sleep from the night before!), I decided to do the half marathon!

Race day was an emotional day for me but everyone was so encouraging and helpful. There where various times around the course where I believed I couldn’t go any further and if it wasn’t for Vicky, who was my absolute support system the entire way around the course, there was no way I could have done it! She ran with me the entire way even though she could have finished a lot sooner- she just wanted to help me finish, which is the amazing thing about the people involved in these events. They don’t just want to succeed themselves, they want to help others to succeed too. With Vicky’s help and a lot of walking, I crossed the finish line. It was an incredible moment followed by a lot of crying from disbelief and just happy tears that I had actually done it!

The course in Uganda was breathtaking – it was something I can’t describe in words but the locals were so helpful. I remember getting to the bottom of ‘The Beast’ [one of the course’s steepest hills] and all I could think about was how big it was. I got half way up and was struggling and some of the local kids helped to pull me and Vicky to the top! I couldn’t have been more grateful. A lot of the children around the course joined in and ran with us too!

I just couldn’t believe how amazing it was running through Uganda and getting to see a lot of it was incredible. I couldn’t thank the Ugandan Marathon enough for giving me these opportunities. 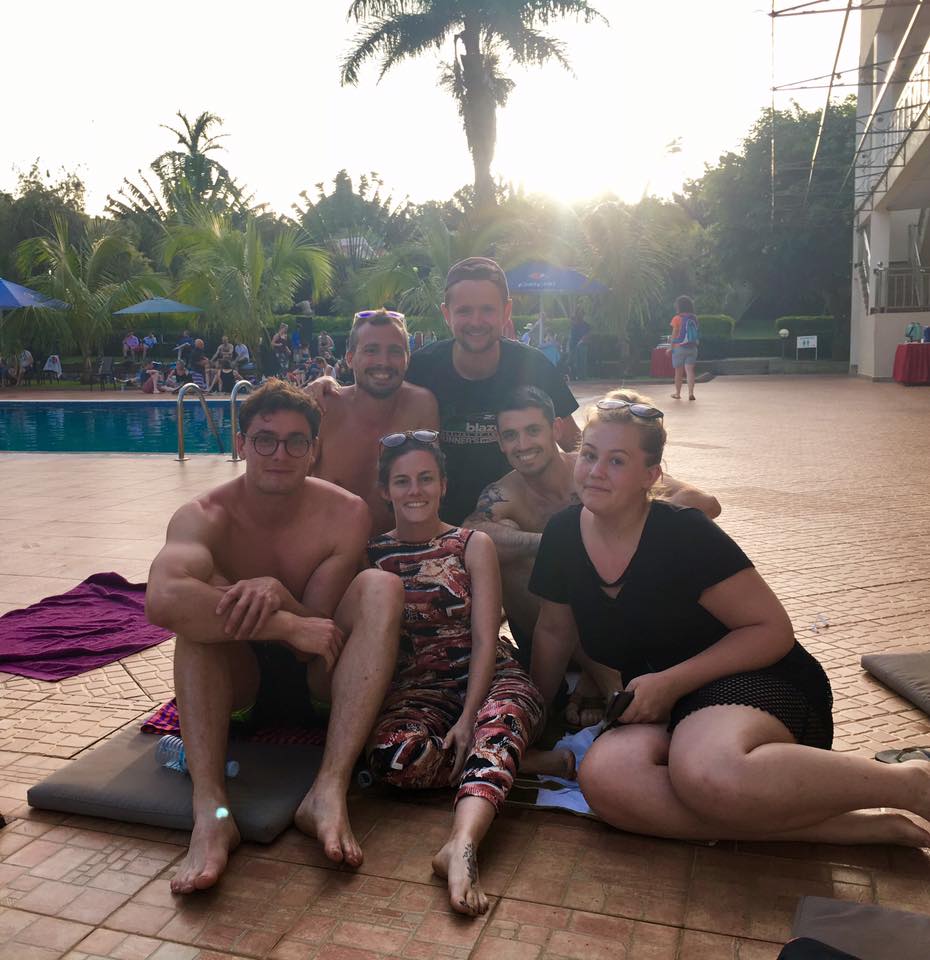 The runners relax by the pool on the day before the race, at the pasta party

4. After the 7-Day Adventure, you took part in the Gorilla Trekking and Safari extensions. Could you tell us about the experience from each and your highlights?

After the marathon was over, we had booked the extension to do the gorilla trek and safari because going on a safari is something I’ve always wanted to do and as we were already out there, we thought why not.

The safari was amazing – we got to see a lot of different animals including lions, hippos, crocodiles, monkeys, antelope and elephants. We went on game drives throughout the day, which was exciting because you didn’t know what you would and wouldn’t see, so you had to keep your eyes peeled for everything. The accommodation we stayed in was great as we overlooked the Savanna and everyone was really welcoming. I think my best moment had to be going on a boat ride on the river and seeing the elephants up close as well as the hippos…it was just incredible…I can’t really put into words how good it was but I would definitely recommend going!

The gorilla trekking had to be my favourite of the two, even though before we booked it was the one I was most nervous about. But being metres away from a silverback gorilla was one of the scariest yet amazing experiences of my life! We spent a good few hours walking through the forest to find the gorillas but even that was great as we got to see a lot and the views at the top of the hills were astonishing. When we did actually find the gorillas themselves, it was nerve racking but after a while, I just felt calm. I think my best moment was seeing the baby gorilla clung to the mother’s back climbing through the trees. Again, it is something I would definitely recommend. 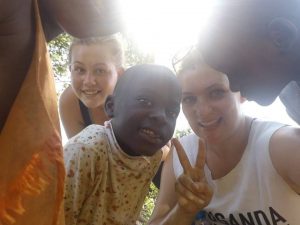 5. Finally, what was your best overall memory from the 7-days, and how would you sum it up for someone who hasn’t been?

My best memory from the seven days in Uganda has to be at Bugabira School, talking to the children and walking up to the field afterwards to play football. Everyone got involved – we were all running about and having fun and the children couldn’t stop smiling. It was incredibly eye-opening to understand what a difference you could be making to someone’s life by just being there. In our society, people take so much for granted and before Uganda, I was one of those people. However, going to Uganda and meeting the people I met and interacting with the children has changed me as a person and my life forever, and that is something I want to say a massive thank you for!

To sum Uganda up for anyone that hasn’t been: it is by far the best thing I have ever done to realise that you are actually helping someone and making a difference in the world is an unbelievable sense of achievement. It changes your perception of everything for the better and it is an experience you won’t forget for the rest of your life. You will meet people who you will make lifelong friendships with. But don’t just take my word for it, if you’re even contemplating it, do it…… sign up. You have nothing to lose and I guarantee you will not regret it. 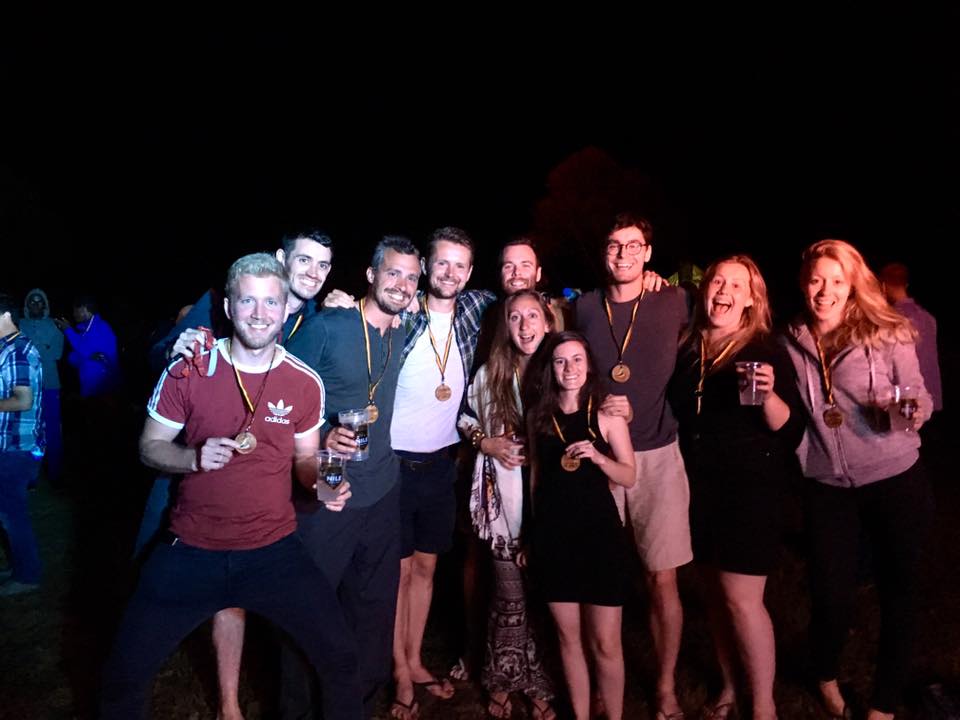 Amy, on the final day of the week at the post-race party, with friends made during the 7-Day Adventure