This week the country held its most special of holidays on October 9th, Independence Day!

Uganda peacefully gained Independence in 1962 and celebrated its 57th birthday this week on Wednesday. A lot has happened since the country’s conception – let’s view a summary.

The country has had 9 leaders in the years since independence with the shortest reign lasting just 10 days under Paulo Muwanga and the longest reign still running at 33 years on under His Excellency President Yoweri Kaguta Museveni. 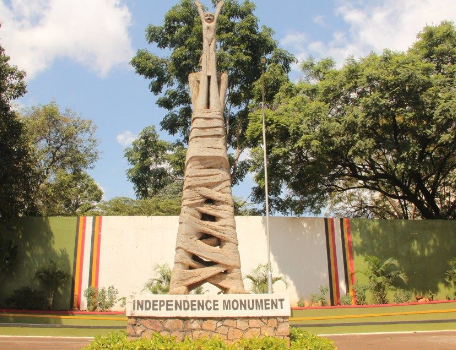 The Independence Monument, funded by the British Colonial government in the days leading up to Uganda’s first independence celebrations, stands in Kampala

While a lot has changed, some things have also stayed the same. For example, as it was in 1962, Agriculture is still the country’s biggest earner and employer, and accounts for about 40% of Gross Domestic Product. Uganda is the African continent’s second-biggest exporter of coffee. Uganda is still a country rich in tradition and the customs of many of tribes that were present for Independence are still going strong today. Kampala has stayed the capital city since Independence and is a part of Buganda Kingdom.

The Masaka District, where the Marathon is run is also part of the Buganda Kingdom. It is no coincidence that the word Uganda and Buganda are separated by the letter “B”. This central part of the country has been very important to the country from the beginning and we look forward to showing you the culture and its people, during the 7-Day Adventure!

We very much look forward to hearing your thoughts on this young and promising country when you visit us!