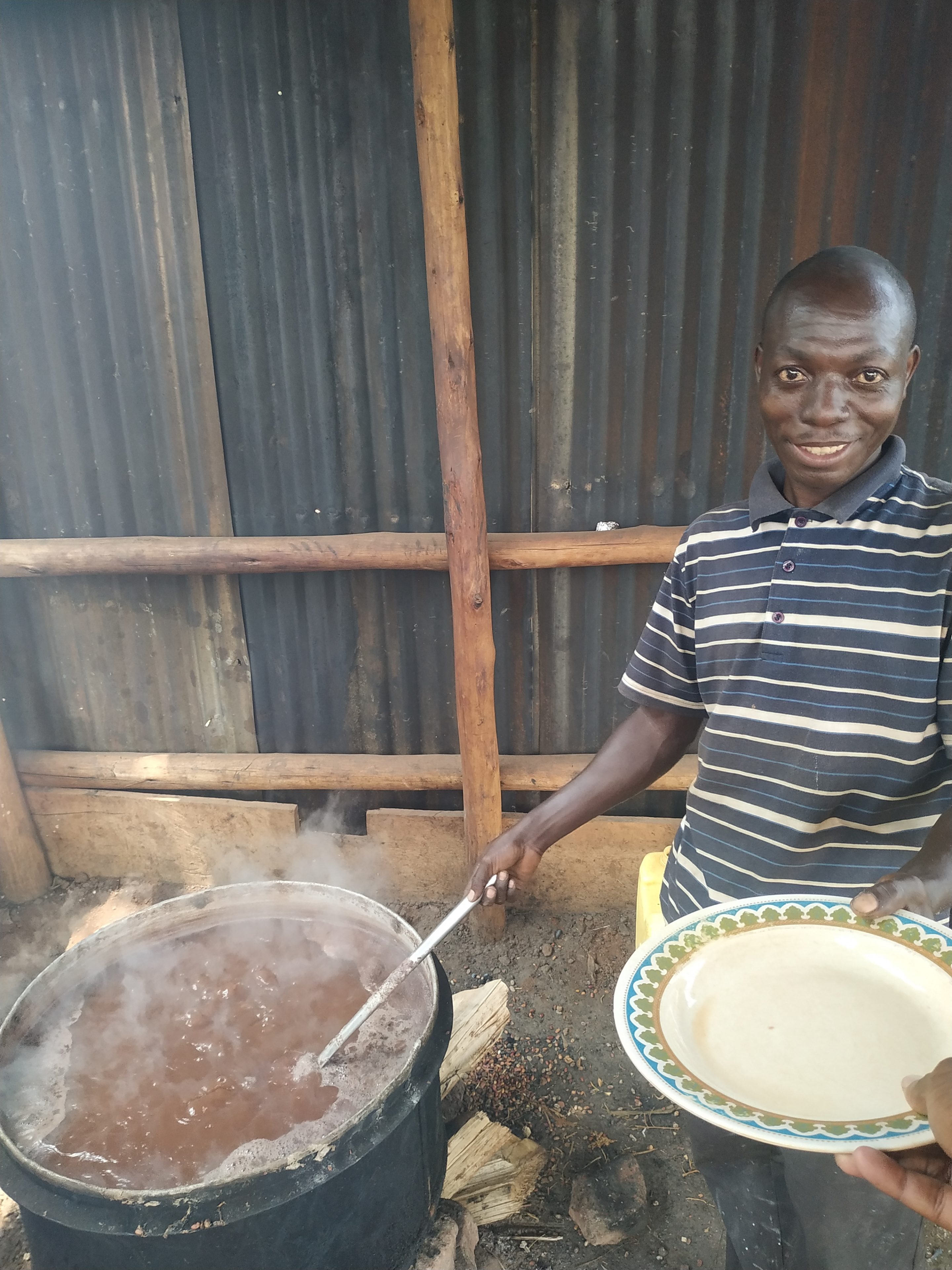 Welcome back to our weekly blog that explores a particular aspect of Uganda life, to learn more about the people, place and Charity Projects which host our Adventure Like No Other. This week we return to the projects being supported by the 2020 event!

Bugabira Primary School is our oldest and longest-running partner! This school and its pupils have been part of the 7-Day Adventure since the beginning, with runners continuing to fundraise for their causes. Starting in 2015 with poultry and solar projects, then a kitchen in 2016, followed by a classroom block, toilets and playground area in 2017, and a staff accommodation block in 2018, our International Runner’s golden legacy is clearly seen on this hill in Masaka.

You may also recognize the school uniform – below big smiling faces – from the personalized welcome photos we share soon after you sign up!

Meet the 37-year-old school cook Mr. Kasirye Peter! Having joined the school almost a decade ago, Peter was born, raised, and currently lives less than a 20-minute walk away from the school. He makes this walk every morning at 7:00 AM for the school day.

Upon arrival at about 7:30 AM Peter begins with washing his 6 saucepans of varying sizes. After they are clean, Peter gets two separate fire stones going. With his experience, it takes him mere minutes to get the wood that sits in between 4 stones burning! 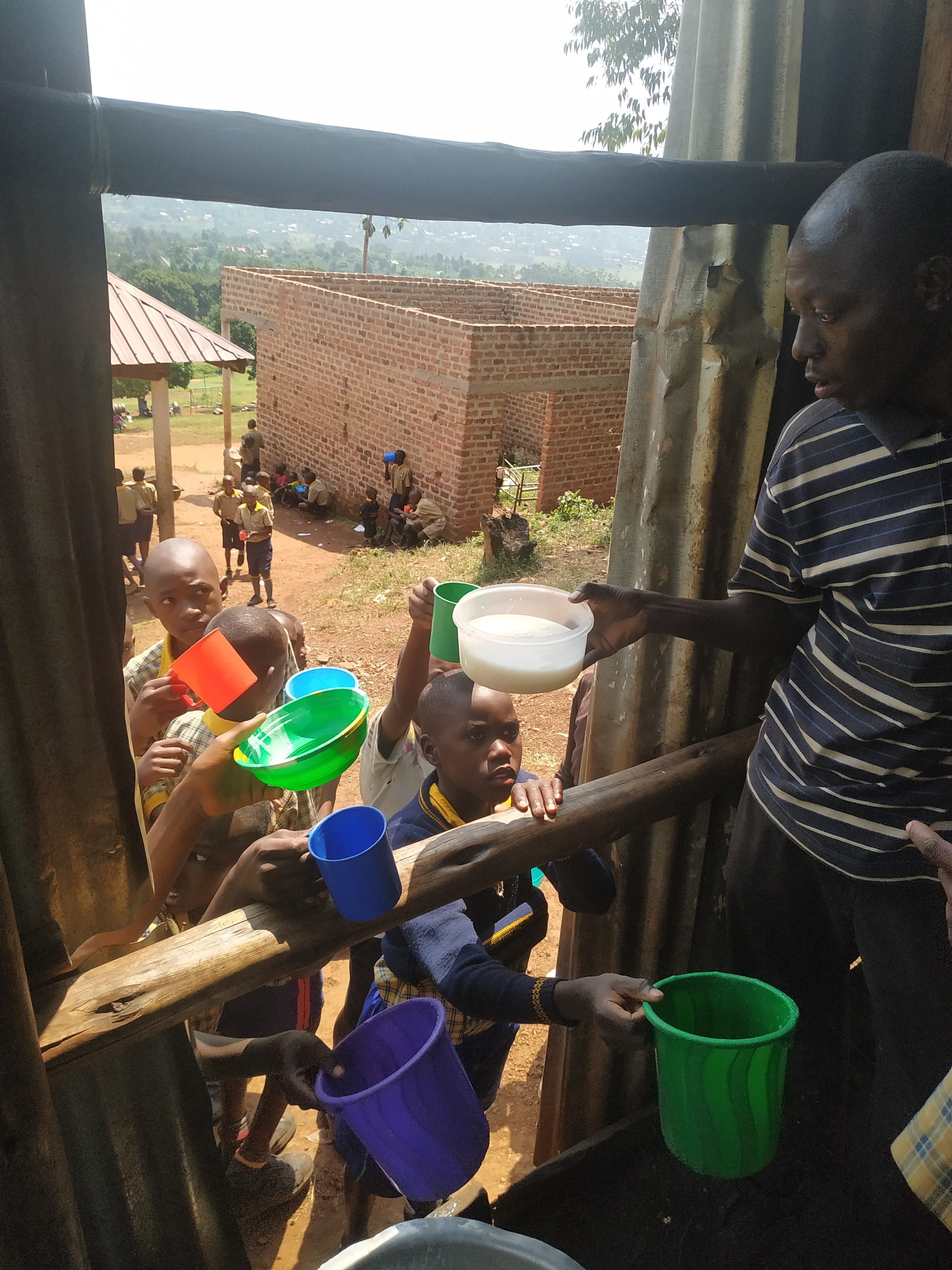 It takes about an hour for the water in the big pan to get boiling. In the meantime, Peter uses a small pan to beat 10 kilos of flour into a paste for the pupils’ morning porridge. Then, once the water is boiling he pours the paste into the pan. The porridge is ready within 30 minutes.

Bugabira’s children start right from the age of 3 through to 13 years. The younger ones who make up the nursery section start their break earliest at 10:00 AM. Among the main reasons for this is the competition in the queue and the accidents that could occur.

At 10:30 AM the rest of the school get their break time. Primary Sevens who are both the eldest and candidate class for the national exams have priority. It is amazing that Peter knows every single face! He picks them out of the line in case they fall behind and urges them forward. Given the pressure which can be gleaned by Martha from Premier Junior School, this is why the candidate class is fed first. The rest follow and break time ends at 11:00 AM.

After break is done Peter first refills the water in the pan filled with the beans meant for lunch, as this has evaporated over the course of the morning since it was first put on the fire at 8:00 AM. Peter then has some porridge for his breakfast before washing the big pan.

Once the pan is clean he fills it again with 140 litres of water. He waits for it to boil, which takes about an hour, and then he pours 37 kilos of white flour into the pan. Using his tall mingling stick Peter mixes the flour with the water and kneads it for an hour to get it ready for the pupil’s lunch at 1:00 pm. With the beans mentioned above, this will serve posho and beans, a traditional Ugandan school meal.

After the lunch break Peter takes this chance to have his own lunch and recover his energy. At 4:00 PM he fills up the big pan with water and leaves it to boil in preparation of dinner’s posho. At 5:30 he adds 27 kilos of white flour (as opposed to 37 kilos) and repeats the process described above, kneading it. The reason for the 10-kilo reduction from lunch to dinner is because Bugabira’s day schooling pupils have long left by this time and it is only boarding students left to feed. The leftover beans from lunch also make the sauce for the evening meal to go alongside the posho.

“I see that the amount of food is not enough. We have pupils getting in the queue twice before others come once. You know there is posho that builds and posho that doesn’t build. If we can go over 45 kilos at lunch we can start to build these children.”

Bugabira are fundraising to establish a school farm that can provide sustainable food for their 400 pupils by the end of 2020. With the help of our International Runners, the school can ensure the children eat well and have nutritional meals to support their studies.

The set up of the farm would mean more work for Peter. I asked his thoughts on this…

“I am happy to work even more if we get more food from the farm. Maybe I will even get a raise!” he laughs.

After serving dinner and cleaning the pans, Peter makes his way home at 8:00 PM. Once there he rests, eats and sleeps ahead of another day.

Thank you for joining us and see you again next week! 🙂