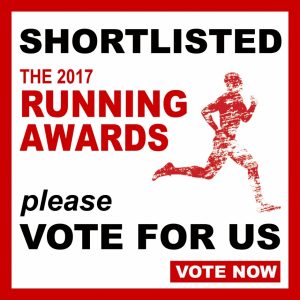 We’re extremely excited to announce we have been shortlisted in the category of ‘Best International Event’ at the 2017 Running Awards! Following our win of the award last year, we’re absolutely thrilled to be shortlisted once again.

This places the UGM alongside some very well-known and long-established races, who are nominated in the same category. This includes The New York City Marathon, Boston Marathon, Dublin Marathon & Berlin Marathon, amongst others.

Using this money, we’ve been able to work in partnership with fourteen Ugandan Charity Projects, to develop them in long-term, substantial, sustainable ways that will benefit their communities, now and for generations to come.

In addition to this, over the last two years, the UGM has featured in The Guardian, London Evening Standard, Runner’s World, and Wall Street Journal’s Extra Mile 40 Awards, as well as been shortlisted for the ‘Best for Poverty Reduction’ award at the 2016 African Responsible Tourism Awards.

But even more excitingly, our feedback from our participants has been excellent. For example, a highlight from last year’s event feedback was one in five of our 2016 participants described the event as: “the best week of my life“ which we couldn’t be more pleased about.

The year ahead looks very positive too, with a number of places on our third-ever event already sold and a good chance of last year’s fundraising record being broken, meaning an even bigger impact in Uganda in 2017!

It really would be very special for the UGM to top this off by claiming Gold and winning ‘Best International Event’ at the Running Awards for a second year in a row.

How can you help us win?

The awards are based on a voting system, so it’s the most votes wins! If you would like to help us win the ‘Best International Event’ category, you can vote for us by clicking here. You’ll need to register, but the whole process takes less than two minutes, so it’s nice and quick.

A massive thank you to everyone who has voted for us so far, we massively appreciate it! But also to everyone who has helped us over the last three years too  – past runners, new sign-ups, volunteers, donors and more – we couldn’t have achieved any of the above without your support. So we’re very, very grateful.

We’ll let you know how we get on in April when the results are announced. Ekkkk….fingers crossed!