One year ago, in December 2014, having never stepped foot in Africa and possessing limited running experience, I decided to take on a massive challenge.

I decided to enter Uganda’s first ever international marathon and run 26 miles on the equator.

Where it all began…

My story actually starts in November, the month before. I’d just received a phone call from my university friend, Andy Bownds. He’d been working as a manager for a London charity for the past two years, but was keen to find a new challenge. He had some exciting news- he’d been offered a job in Uganda, developing a new marathon scheme, as the organisation’s Community Partnership Manager, where he would be working on the charity side of the event.

It sounded like an amazing opportunity and one that suited him perfectly, especially as he’d been thinking about moving out to Africa. I was happy for him. 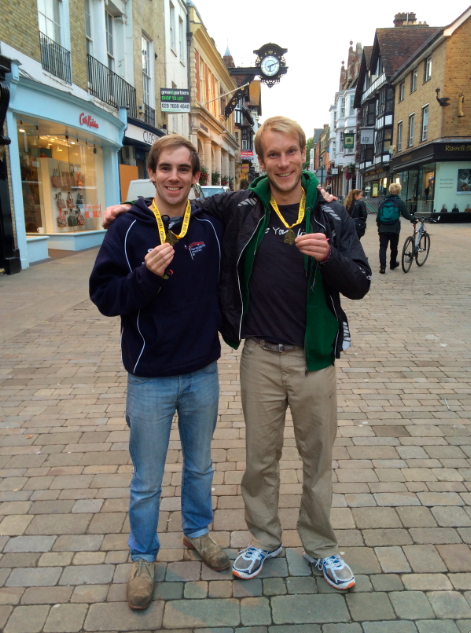 Me (Left) & Andy Bownds (Right) in October ’14 after completing a race, in Winchester, where we went to uni. Shortly after this, he would be offered the job of ‘Community Partnership Manager’ on the UGM team

So a few weeks later, me and some university friends organised a night out to see Andy off on his travels. It was there he suggested I should get involved in the marathon and sign up.

He explained how the marathon worked, and it sounded great, but my initial reaction was my head filling with a million reasons why I couldn’t do it…

“I’m not fit enough…I don’t have enough time to train…I don’t have the time or money to do the event…I’m not sure if anyone will sponsor me….Me? Run 26 miles on the equator!?”

So my reply was, “no I can’t”, but as Andy was a good friend, I agreed to give it some more thought, despite the doubts in my head.

A Change of Heart

Over the Christmas period I gave signing up to the marathon some more thought. Even over the busy festivities, the thought of the event kept nagging at me, despite some of my reservations.

But as I entertained the idea more, some reasons why I should do the marathon began to pop into my head:

#1 It was the chance to travel to Africa- I’d travelled to Asia, Europe and the States previously, but I didn’t know when I’d get the chance to go to Africa or Uganda. The Uganda Marathon offered the chance to visit and explore a whole new continent! It was an adventure!

#2 It was the chance to fundraise for a great cause- I’d recently fundraised for St Christopher’s Hospice, which reminded me how much I enjoyed fundraising, from the online campaigning to what you do in person. (It’s daunting at first, but once you get going with it, it’s really fun!) Plus it was on my bucket list to fundraise for an African cause and a mental health charity at some point, and the Uganda Marathon’s ‘split’ option allowed me to do both! So I’d be running for Uganda and a cause close to my heart!

#4 It was the chance to take on a big and epic challenge!- It was certainly a scary prospect running a marathon in Uganda, in the heat and humidity of the equator! I wasn’t the most experienced runner (or the fittest), but sometimes it’s good to do ‘scary’ as it pushes you to exceed your limits. Logically also if I signed up, I’d find time to train, and in the race I’d just do my best, even if that meant going really slow or walking. The training and fundraising would be a great challenges, and the week was something to look forward to in 2015 as well.

So after giving it some thought and considering the reasons above, the “No I can’t” changed to “Yes I can”. On December 27th I took the plunge and signed up for the Uganda Marathon 2015. It was a great few months leading up to the marathon as I trained and fundraised, and my time in Uganda was even better- the race was tough but went well, I got to explore Uganda and experience the projects too.

This is certainly a time where, in hindsight, I’m glad I said, “Yes I can” and decided to run 26 miles in Uganda.

Up Next- One Year On: How Running the Uganda Marathon Made My Year