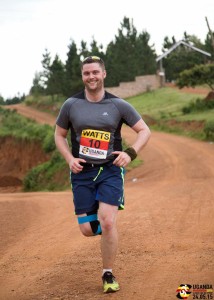 The runners make the Uganda Marathon what it is. The friendships, the community, the fundraising and the determination to finish is why UGM is truly a Race Like No Other. We want to tell the stories of the runners who took part in the first ever Uganda Marathon, because it’s their stories that are most exciting!

What made you sign up for the Uganda Marathon?

I met a couple of the organisers through Escape the City and got talking to them about the Marathon. I spent the better part of a year teaching in Uganda during my Gap year. I fell in love with the place and especially the people during that time as they are incredibly welcoming and friendly. When chatting through the nature of the project fundraising I realised that the approach was a lot more in line with my views and experience. Having done a number of events to raise money for community projects in various parts of the world I’ve seen money wasted on things that the locals don’t especially want or need. The focus of the fundraising being on things that the community have specifically asked for and are personally invested in gave me a much bigger personal investment in the event and fundraising.

Also, I’ve been looking for a good excuse to get myself back out to Uganda and what better than a challenge that raises money and allows me to meet a load of great new people.

Was it what you expected?

If I’m honest I wasn’t entirely sure what to expect. I know Uganda fairly well and that was very much what I was expecting, although the locals did still manage to surprise me with acts of kindness and generosity. With regards to the race and event week itself I was excited but honestly fairly nervous. Mostly I was nervous about the camp site, the facilities and the running itself. Don’t get me wrong, I’m not particularly precious but I knew the location hadn’t experienced that many people on site for that amount of time before and didn’t know how the infrastructure would stand up. For the most part, my concerns weren’t warranted, a few problems that you would expect when camping in relatively rural Africa such as the showers running dry occasionally. I know from chatting to the UGM guys since that there are plans afoot to make the beautiful campsite even more accommodating for next year.

I have to admit that I wasn’t too worried about whether I’d get on with the people there as I’d met a few at the welcome night and knew I would have a decent time with at least the ones I’d met already. As it turned out, the other runners were probably the biggest highlight of the trip for me as I know I’ve made some very good friends. Also, I had anticipated everyone out there being super fit and healthy athletes, which did intimidate me as I’m far from athletic. However there was as big a proportion of people who wanted to stay up, have a few beers and just chat round the campfire. In fact I can’t actually think of anyone who was purely race focussed and didn’t come chill by the fire on at least a couple of the evening.

Which projects did you choose to fundraise? Tell us about why you chose this project and your experience with them in Uganda 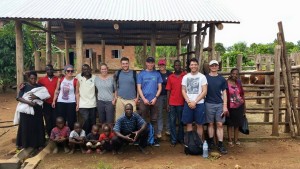 I predominantly raised money for Kitovu Mobile. Kitovu are a fairly well established charity who’s primary remit is to provide assistance and treatment to those affected and infected by HIV and AIDS. The projects they want to raise money for were some computers at their satellite treatment locations to allow them to provide better treatment and education to the rural communities surrounding Masaka. On top of the computers they wanted to raise money for their agricultural education projects, specially to help build a cow shed. It was this cowshed that we actually helped to build on our day with Kitovu mobile. Before we arrived in Masaka the money we had raised thus far had been used to buy the necessary materials and to prepare the land for construction. It was hard work but a lot of fun. I have to admit that I actually wandered off with the agriculture teacher to look round the farm as I’m a bit of a botany and coffee nerd so wanted to see if I could help out there as well.

You came to Uganda not being much of a runner but you finished! Were you confident before that you would finish the marathon and what kept you going 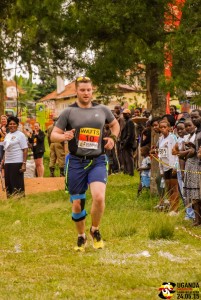 Not much of a runner is very much an understatement. Between being overweight and having some fairly considerable issues with my leg joints I make most costumed rhinos look like Olympians. I was almost certainly the weakest runner out there. That said, I was fairly confident that I would finish but that’s primarily because I’m incredibly stubborn and planned on finishing even if it meant walking the whole thing and meeting everyone at the party that night.

The training runs earlier on in the week were absolutely essential for me in terms of keeping nerves under control because it showed I could run at least moderate distances in the Ugandan heat and also gave an insight in to just how supportive the locals were going to be around the course. I would thoroughly recommend running a few times during the week leading up just to acclimatise, and to get over the galling nature of being outpaced by an eight year old in jelly sandals.

What was your overall best memory of the Uganda Marathon and also how would you sum it up for someone who hasn’t been.

The best memory of the Uganda Marathon is a very hard thing to decide. While I suspect a lot of people might say the race itself I would probably disagree. Don’t get me wrong, the race was incredible, but it was such a small part of the whole experience. There were a few stand out highlights for me. One highlight has to be the day we spent at the vocational school for disabled youngsters. The kids were brilliant, patient, friendly and hilarious even when I accidentally managed to make a woolly hat of the German flag rather than the Ugandan flag. 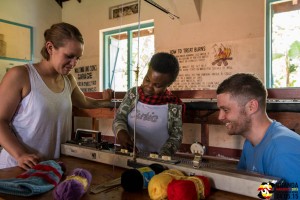 Another is how immediately the people of Masaka welcomed us as part of the community and how excited they were for the marathon and the work being done for the town.

I’ve already mentioned the other runners as a highlight but it’s worth saying again how much the runners all came together as a group of friends so instantaneously and actually how close they’ve remained.

The whole week is an amazing experience. It offers something that so few trips can, even if you’ve travelled extensively then there’s something new for you here. Also, if you’ve never experienced Africa and want to get a taste of it then this week is a perfect way to do it. You get to go to places and meet people you would never get to on a normal holiday and yet keep the security and infrastructure you would associate with a holiday. I don’t mean to sound like an ad but it’s true and I’d like to see a whole bunch of new faces out there next year.

Ian is now working with Kitovu mobile to set up a small, experimental coffee plantation in Masaka, the plan is to grow a higher quality coffee bean that he can use for his business.