Welcome back to our weekly blog that explores a particular aspect of Uganda life, to learn more about the place, and this week – the style of the people who host our Adventure Like No Other!

Jewellery has been important to African cultures since time immemorial. It is among the earliest places where people first wore and made jewellery. For example in Kenya over 40,000 years ago, beads were made from different materials, mainly wood and different stones. For Uganda, jewellery has even formed the basis for various tribe’s early stories and myths!

As time moved on in Africa, native craftsmen have improved and developed their jewellery-making techniques, and today those products are some of the most beautiful pieces in the world.

One such craftsman is Mr Henry Bidandi, a 33-year-old from right here in Masaka! Having learned the skills from his elder sister, Henry has been working in crafts for 5 years now at Emily Craft Shop (named after his sister). In fact, he helped make the Uganda Marathon bracelets which our International Runners wore for 2017’s 7-Day Adventure!  This week, he teaches us how to make a glass beaded earring… 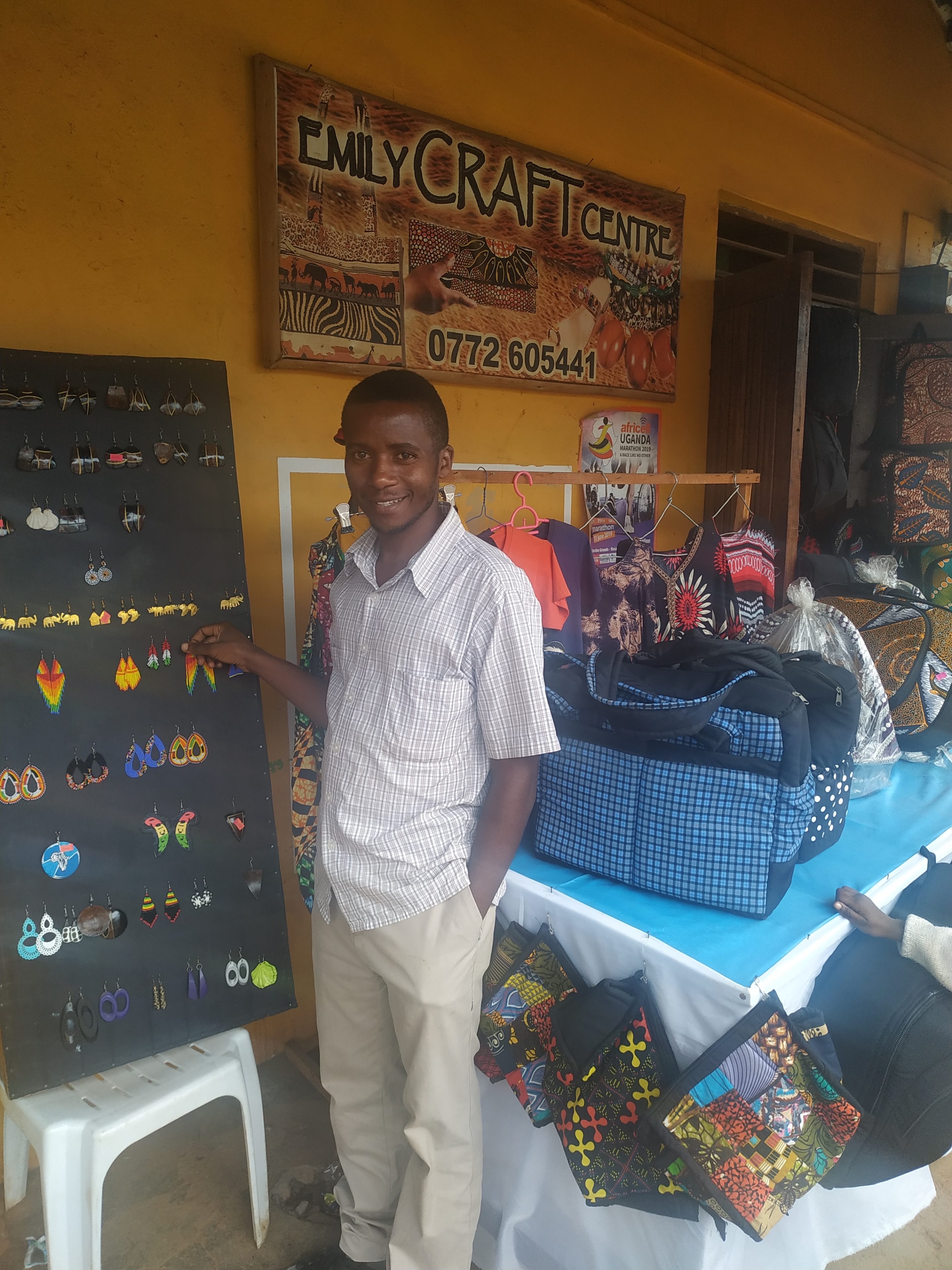 What do you need? Firstly, a clear idea on the colour scheme for the earrings, and then small glass beads of your preferred colour (s), along with black thread, needle and hooks. Once these have been acquired, we can start the stitching!

After threading the needle Henry puts the first four beads through the needle. He then loops his needle and sends it through two of the four beads. When you pull the thread after doing this, your first two vertical lines with two beads on either side appear. Great start!

Next, send the needle through the second vertical line of two and pull to tighten. Now if you are doing a multi-coloured earring it is time to pick another colour because as Henry says “Two lines at a time make the colours more vivid.”

Now you can start on your third and fourth vertical lines. Send two beads through your needle before pushing it in between the previous pair of lines. This attaches your beads below. Send the needle through the second bead of the new line and pull to make it firm. Do the same to the first bead of the new line. 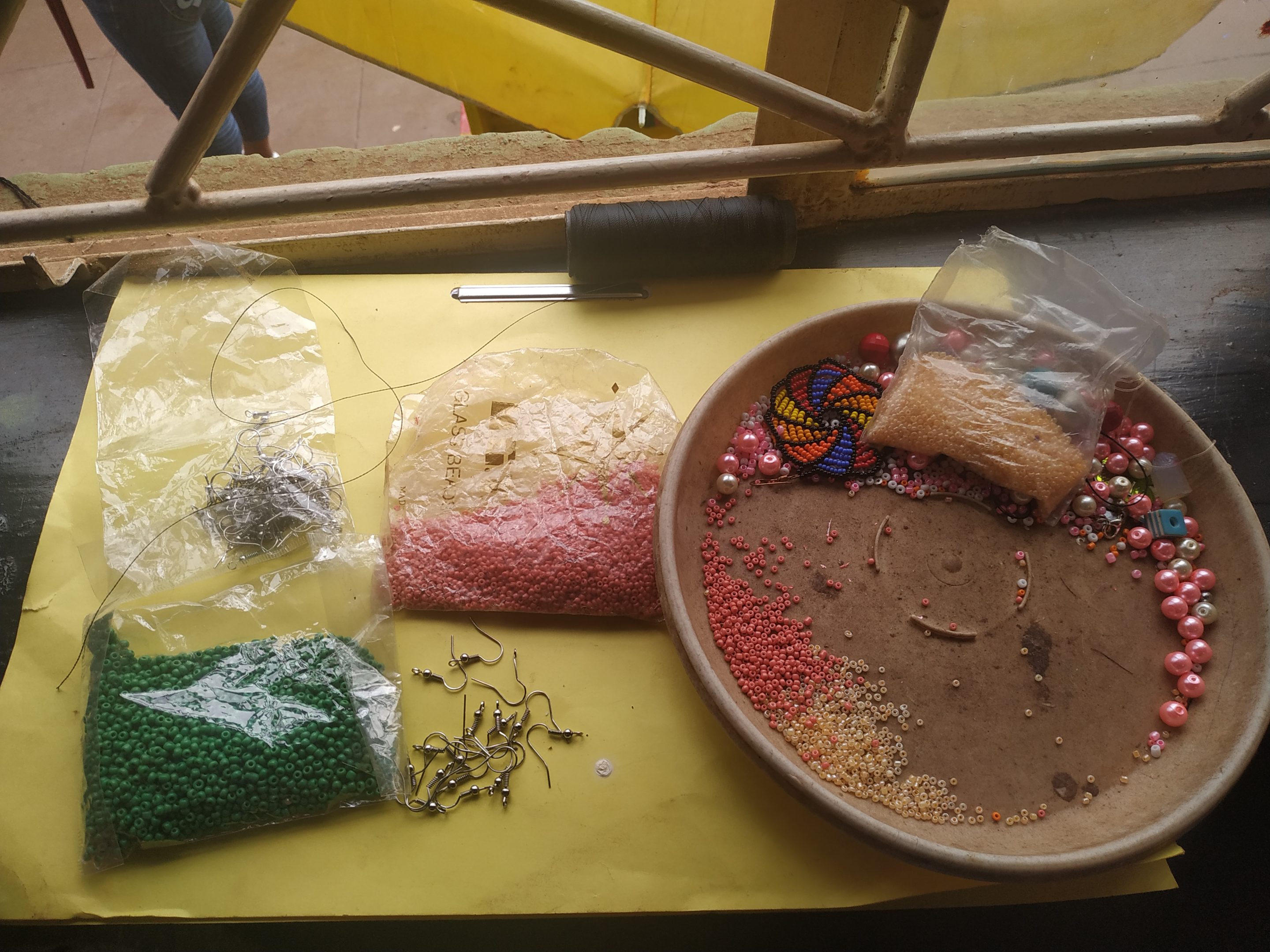 Henry repeats this method as works his way down the earring starting from the narrow end at the top. Each pair of lines downward involve an increased number of beads horizontally as well as a variation in colour. So 2 white, 3 pink then 4 white, 5 pink till he ends with 8 white at the bottom.  So keep repeating the process shown in the previous paragraph till you have what Henry calls the base!

Now to add what Henry calls “the hangings”. Depending on how long you want it, Henry says it doesn’t matter how many beads make your first line of hangings. Just make sure your second line has more beads! So if the first line has 8 beads, the next line should have 10 and so forth with the longest in the middle being about 20 beads long before mirroring the numbers on the other side of the longest. This symmetry makes the earring more beautiful.

Your thread should be pulled long from your last vertical line. Keep in mind your colour scheme as you put your beads through the needle. Henry likes to use the second colour from the top of the earring to make up the majority of his hanging before “locking” it with the first colour. So send the glass beads through. Once you are happy with how many there are, pick a last bead.

Making sure to keep the last bead away from the rest and loop the needle through the rest of the beads. You will notice the last bead is now holding it all together! This is what Henry calls “locking”, ss he explained to me in the video below!

If you would like a lesson from Henry on how to make these earrings during 2020’s Adventure Like No Other, let us know in the comments of our Facebook posts!