There’s been an awful lot said about the Ebola outbreak – some ridiculous, some well considered and many bang between these two extremes.

We’ve been asked a few times about Ebola, and whether its affected our preparations for the marathon. In short, absolutely not. The Ebola outbreak is over 3,000 miles away from Uganda- to put it into perspective, that’s the same distance is London is to Iran, and twice the distance from London to Moscow. But let’s go into some more details, and actually consider what the outbreak means for the continent of Africa as a whole.

First and foremost, we should all applaud the reactions of dedicated healthcare professionals and aid workers. Not just those that live in the three affected West African countries (Guinea, Liberia & Sierra Leone), but from the wider African community and all over the world. They have decided to get their feet on the ground- putting themselves in danger, to help others. These people are absolute heroes, they are phenomenal and have just enough daring to be of actual use to a world in which we increasingly hold tight what we have rather than take a risk. Importantly, whilst they are taking a risk, they are also acutely aware that this is a manageable risk.

The current outbreak- despite being very confined to three small countries, is severe. Many countries in the region have historically suffered Ebola outbreaks- but they are normally localised, and dealt with swiftly by proper contact tracing and quarantine procedures.

Uganda itself has dealt with 4 outbreaks over the last 40 years – the largest of which resulted in only 425 contracting the virus- all of which were rapidly contained. Ebola is entirely manageable. Let’s remember that before we worry ourselves sleepless about the risk of spread.

Indeed, the common cold kills about 2500 in the UK every week in the depths of winter. Although the chap who walks into your office sniffling and snorting is considered a nuisance and, at worst, a “bleeding nuisance” I am yet to see BBC, Sky News et al. camp outside his house to consider his every move- as we saw a couple of weeks back with Kaci Hickox in Maine, USA. How about that for causing more problems than you solve?

And here lies much of the issue with our perception of not only Ebola but the vast, diverse continent Africa as a whole. Because when I say Africa as a whole I mean it is a quite extraordinary continent made up of over 1,140 million people, 58 countries, more than 3,000 ethnic groups and 2,000 languages. Just as in the UK, people from different areas have different accents, attitudes, they respond differently. Geordies are different to Scousers, both these northern regions differ from those people South of the Watford gap. These are some huge generalisations about the UK- and that’s just the UK! We have only the 1 official language and just 64 million people.

How about we take Europe- with its 58 countries, 87 ethnic groups and 60 languages.

You see the problem? Africa is not a country: it is a huge continent with more diversity than we in the West can possibly understand. We would never generalise about Europeans when we are so aware of the differences between even France and Germany! We in Britain pride ourselves on how different we are from the rest of Europe. How do you think Ghanaians feel when we lump them in with Nigerians in a generalised definition of “Africa”. Did you know the Ghana v Nigeria football rivalry is every bit as intense as when England and Germany clash on the pitch? 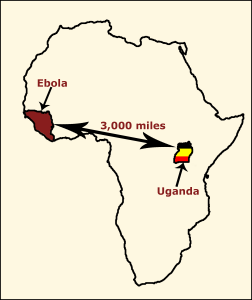 You commonly see two visions of Africa portrayed across the world:

No, each country you visit has its own joy, it’s own extraordinary people, it’s own ordinary people – those who go about their daily life with neither the vision of a hunting pack of lions attacking an elephant, nor the appalling squalor of life in a slum.

The majority of your time you will be surrounded by interesting, intelligent people full of the joy of life who- Sir Bob- would be more than content if our gift would be to stop patronising them and lumping them all together as living in hot, dusty poverty.

These people you’ll meet in “Africa” would suffer considerable disruption to their daily lives were there to be snow there this Christmas (might I add, that a heavy snowfall in the UK is not considered such a blessing either: cue “travel chaos” headlines as loved ones are stuck at Euston Station making threats of “strongly worded letters” because “snow should not stop our trains in this day and age”). Furthermore, church attendance across the much of the diverse continent of Africa shows that “they” likely do know it’s Christmas time.

We must affirm these exceptional people. We must visit all the countries across the vast, diverse continent of Africa and enjoy their company. That’s we at Shauku Foundation, CHEDRA & the Uganda International Marathon are backing the #unite4westafrica campaign. A campaign not driven by guilt- or celebrities that have not visited the continent they regard as just one country. It’s based on the affirmation of an extraordinary, magical and misunderstood area of the world – an area we know so very little about and can’t suppose to know more.

3 out of 58 countries are currently in the grip of a brutal virus. The rest of this wonderful continent of Africa is still working, striving and progressing as before: the daily commute in Kampala is still a gridlock,  The lion still hunts the zebra and the refugee camps scattered across the plains are still far too full. I implore you visit as many countries across the continent of Africa as you would across Europe. Just as in Europe you will not contract Ebola but you will struggle with language, you will see little bits of every day life that boggle your mind, you’ll laugh, you’ll meet people who welcome you with a smile from ear to ear (a greeting that could make the average Parisienne self-combust), you’ll find the last remaining gorillas on earth, lakes as big as countries, sun that beats down a relentless dry heat that feels so fricking amazing, bustling cities, silly laws and by-laws, new smells, new foods and entirely new cultures and people.