Guest Blog: My Story of Race Day – by Simon Fox 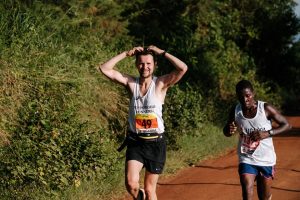 Here, one of our runners tells his story of Race Day and running the full 42-kilometre marathon course through rural Uganda. An experienced runner, Simon shares his story – from waking up early in his tent in Athletes’ Village, to being out on the course, crossing the finish line, and being awarded his medal at the closing ceremony of the 7-Day Adventure.

A 4:45 am alarm buzzed on the Garmin and the 4 eco-tent boys were up. New-found friends after a week of intimate camping and eco-showering we were buzzing for the pre-race porridge and eggs. Fumbling around and nervously checking that the final preparations had all been made, we were ready. A mini-bus costa trip down to the start line was infused with more nerves and a morning song with a bus full of newly formed friends. Anticipation, an African delayed start, a warm-up of stretching along to local disco beats, a chat with a local 2 hour 16 marathoner on his warm up, and we were off! 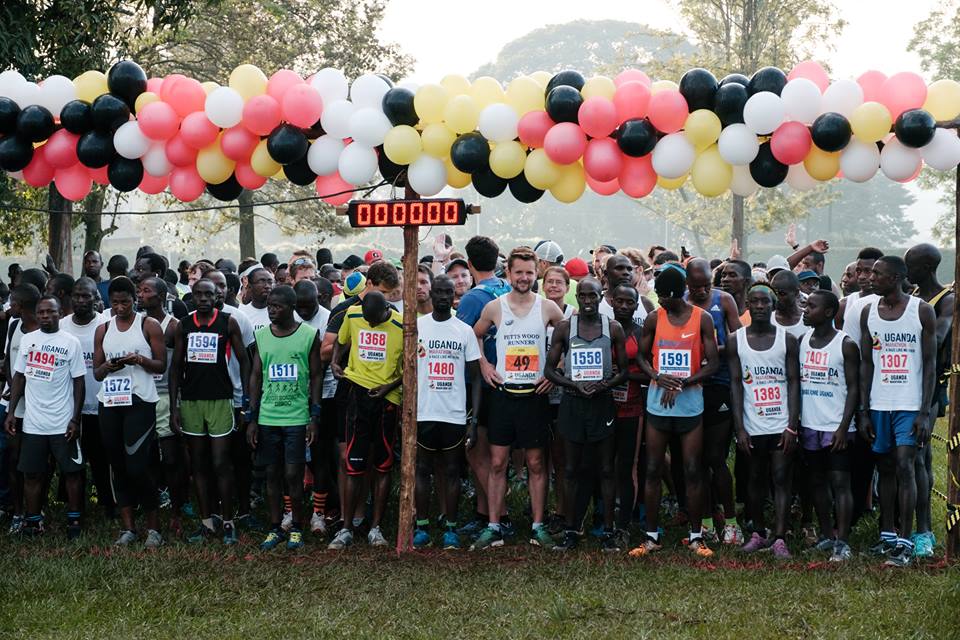 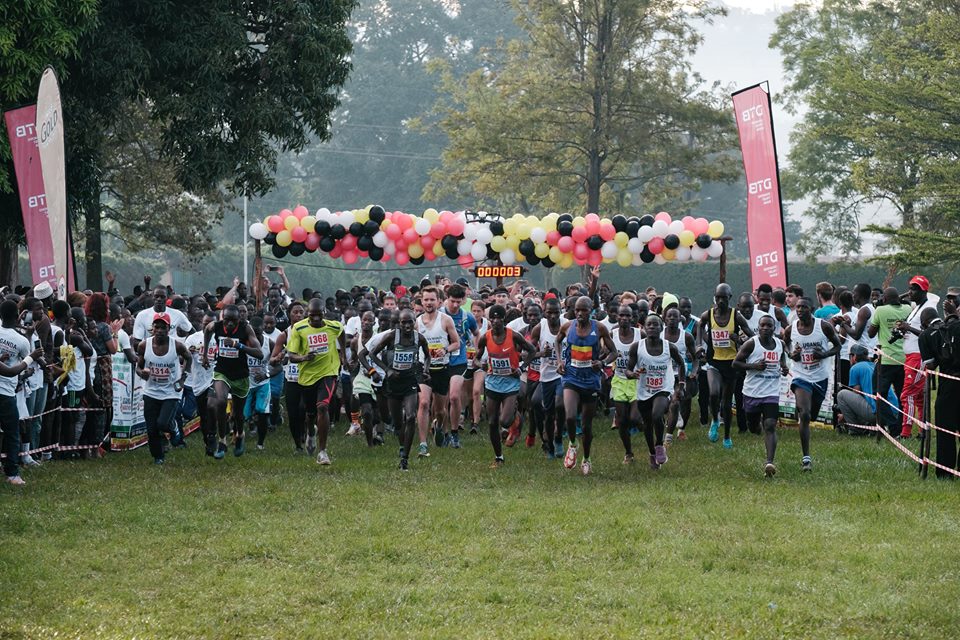 Ready…steady…GO! And they were off – Simon alongside 100 International Runners and 2000 local runners (Photo Credit: The Glass Passport Project)

Caught up in an early adrenaline-fuelled pace I looked to test whether a 3-hour target would be possible. Ups, downs and a harsh, bumpy terrain inside the opening few k gave me a quick realisation of probably not! The route wound through traditional Ugandan backstreets with locals sat outside selling whatever would grow in their back gardens, up steep hills on roads of red dirt cracked in two by gully’s. Locals laughed and cheered as I came through as the first mzungu, may be surprised to see my pasty white skin run past their front door! Cameraman Rich whizzed past on the back of a motorbike to take up prime photo snapping positions as the runners came through; a backdrop of early morning mist being burnt off by the rapidly rising sun on a backdrop of dense equatorial greenery. 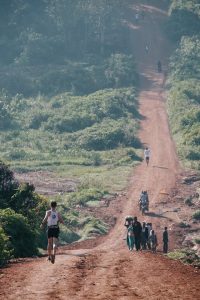 15k in and up came ‘The Beast’. The most talked about hill of the week. Down and up the other side of the valley and I was amongst it. Coming to an almost complete stop I focused my eyes onto a sign congratulating runners on the amount we’d collectively raised; a reminder of what was the greater cause of the day. It was a sharp right at the top and the beast gave way to welcome flatness. What wasn’t mentioned during the week was that this flat section lasted all of 300m before a sharp left and again you were climbing, just as steep and what seemed as 3 times as long! The eventual reward was a flat ridge with 360-degree views looking over the entire region of Masaka which over the past 7 days had become our home.

Descending back into the business of town I passed motorbikes, street vendors and locals making their way to Sunday morning church and crossed the 21k mark. I told myself I felt ‘good’ and was ready to do it all again!

An electronic jingle was getting louder and I turned to realise I wasn’t the front-running lone mzungu I thought I was. A Scandinavian runner pulled up alongside me, we chatted briefly and I tried to work out the size of my competition. The route took us up a hill towards our campsite accommodation and as quickly as Mr Scandinavia had entered the frame, he had departed, back into the distance, not to be seen again. Maybe the Masakan heat was too much for a man more used to the opposite extreme in temperature! 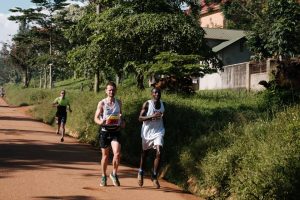 Even as I pulled away, I knew I was slowing. Heat and heavy legs progressed quickly and water stops became full-on shower stops with thoughts of ‘The Beast’ and its uglier bigger brother entering my mind. I started passing 21km runners. With each runner taking up their very own personal challenge and some impressively completing their first half on those devastating hills! A high 5 with friend Amy at the base of the beast, and I was shouted up the other side; ‘no, you’re not walking up Foxy!!’.

Reaching the ridge for the second time and I was hurting. Walking up the bigger brother hill was unavoidable and by this stage, running had become an awkward shuffle. Counting down Km’s back into Masaka town, I was greeted as first Mzungu and 5th overall runner by the amazing Uganda Marathon team cheering and smiling in their orange t-shirts as they had done all week. I managed to grin through the pain of the final 200m, and tried to fool everyone I was pain-free and had just had the time of my life, which, but for the pain, was the truth. I held the Ugandan flag aloft as I crossed the finish line ready to embrace Sadie and Esther; my clan leaders from the week who had become special friends. WOW! I was overcome by indescribable satisfaction and relief. 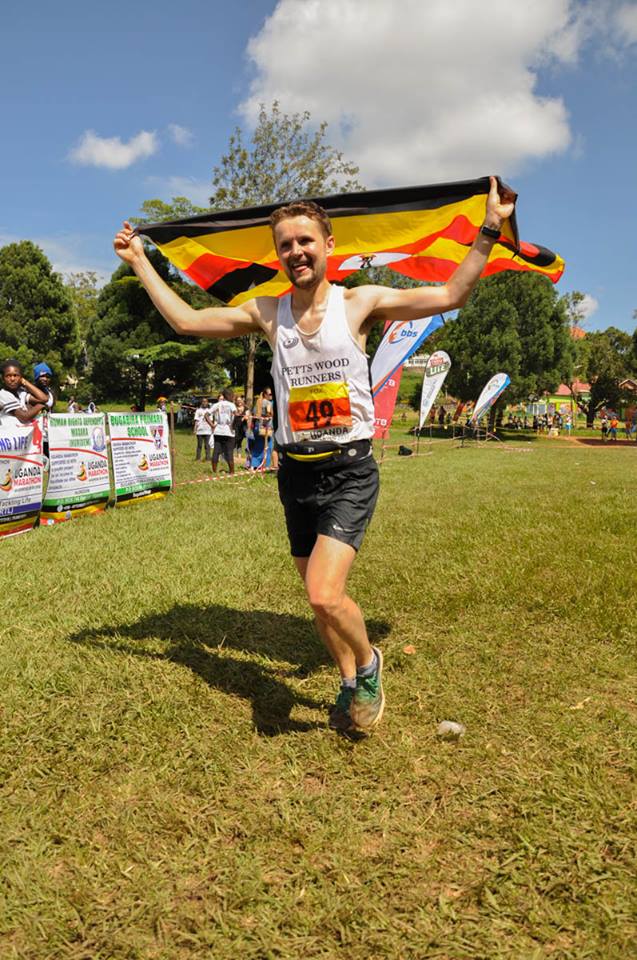 Simon completes the Uganda Marathon in support of two projects and also sets a new course record for fastest International Runner at 03:19:37

4 hours followed of cheering fellow runners home as they crossed through the finishing tape. Scenes of emotion as runners completely empty crossed hand in hand with the friends they had made and then journeyed with over the past 7 days and 42km. Recovery rolexes, ice creams, chicken and fruit sorted out my depleted energy levels and after the buzz of celebrations, we were off in the minibus to camp, sharing stories and celebrating with a well-deserved final eco-shower, looking out over the hills we had just conquered!

The medal ceremony concluded our time in Masaka and it was time to reflect on the beautiful place, people and projects we had encountered in the past 7 days. The setting sun and burning log fire was the perfect background for the thoughts to sink deep inside. Masaka time had ended, but the love affair, friendships and deep lasting connections had only just taken root!

A massive thank you to Simon for joining us in Uganda and being such a brilliant participant, both in the lead-up to the event and during it, writing this post and for also for writing a training diary for us.

Thanks Simon, and all the best for your next Adventure! 🙂